The pinnacle of Jacob Wohl’s career was his attempt to shut down the Mueller investigation by cobbling up a fake company, Surefire, and spreading the rumor that they had info on a sex scandal involving Robert Mueller. He’s a far-right, fanatical conspiracy theorist who is paranoid about Muslims. He’s also not very bright.

Laura Loomer’s career reached it’s peak when she handcuffed herself to the door of Twitter’s New York office door to protest the fact that her account had been banned for racist remarks. She gave up when she got cold. She is obsessed with Muslims. She is also not very bright.

It was kismet. These two shallow, untalented, lazy people who run after any media attention have joined forces to…chase after more media attention. They have failed to name their partnership in media whoredom, though, so I’ve decided to give this whiny duo one.

Let’s call them the Chucklefuck Twins.

Anyway, they have paired up to engage in another media blitz that will be just as successful as their previous efforts, I’m sure. They have picked a target, hired a security and film crew, and have dived on their chosen Gotham City to right wrongs, reveal the villainous underbelly of the scabrous slums, and document the evil that lurks there. 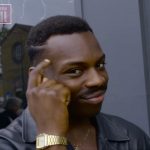 They chose to descend on the city in February, which tells you how clever they are. Loomer got cold in NY in November. We’re at -5°C here on the prairies, and we’re supposed to be hit by a major blizzard tonight. I live here in outstate Minnesota, and I wouldn’t travel to Minneapolis today — we know that this time of year the roads are hazardous and the weather can turn on you.

I guess we’re an irresistable target to racist xenophobes, though. Minnesota has the most refugees per capita of any state. We’re honestly open and friendly, we encourage people to move here, we think it’s great that they form distinctive communities. We’ve got a large Hmong population, for instance — they and other groups have been an asset to our universities and make our cities diverse and interesting. It turns out that an atmosphere of tolerance improves the quality of life for everyone.

But the Chucklefuck Twins aren’t here for the Hmong. Oh, no.

Wait. The total population of Somalis and people of Somali descent in Minnesota is between 40 and 50 thousand, and many of them were born here. We get a few thousand refugees from all sorts of places, not just Somalia, every year. His math is nonsense.

I’ll return to that “third world ghettos” comment in a moment.

Like in Germany and Scandinavia, bleeding-heart people are being taken advantage of by power hungry politicians—leading to disastrous outcomes

I’m sick to my stomach after seeing this in America

That first bit is correct. Minnesota now is populated mainly by descendants of immigrants from Germany and Scandinavia who displaced the native Ojibwe and Dakota nations. Speaking for my own family of Swedes and Norwegians, one thing that may help make for a more tolerant community is that we remember and take pride in our ancestry — people still celebrate Swedish and Norwegian holidays here, and make traditional foods — so we’re sympathetic when other people arrive here and try to preserve their own culture. We’re not being taken advantage of here, we have our own family stories of moving to a harsh environment and both trying to adapt and retain our identities. Somalis, welcome! What do you like to eat? Shall we share?

The Chucklefuck Twins are not making friends here. At the start of this video, they pan across our snow-covered streets and declare Minnesota not a very pleasant place, it’s a wonder why anyone wants to come here (you showed up in February, Chucklefucks!) before making a big complaint about the Immigrant Law Center of Minnesota.

Jews are banned at the Immigration Law Center of Minnesota https://t.co/q4efObPAGJ

They showed up at the Center and quickly determined that Jews are banned, and they only help Muslim Somalis and claim that they were kicked out and the door locked behind them, when they disingenuously say they were only there to see if they could help their oppressed Jewish relatives in Europe.

I will just point out the official position and role of the ILCM.

Immigrant Law Center of Minnesota (ILCM) is a nonprofit agency that provides immigration legal assistance to low-income immigrants and refugees in Minnesota. ILCM also works to educate Minnesota communities and professionals about immigration matters, and advocates for state and federal policies which respect the universal human rights of immigrants.

They help “low-income immigrants and refugees in Minnesota“. They are not a travel agency. They are there for people in Minnesota who need legal and educational assistance.

The Chucklefuck Twins showed up at their door with a film crew and bodyguards. They were obviously not in need of their kind of help.

The Chucklefuck Twins are lying assholes, trying to gin up controversy.

And that’s right…they have hired a top-notch security team and are driving around Minneapolis in armored cars because they are so terrified.

Jacob Wohl and Laura Loomer say they have been going around Minneapolis in armored cars, with security, because they feel Rep. Ilhan Omar might send someone after them. pic.twitter.com/VnmFAybpGF

This is ridiculous. No one cares about two paranoid, xenophobic chucklefucks wandering about the city. No one is conspiring to go after them. They’re here for two reasons: because Ilhan Omar (“The Jihadi” as they call her) was elected to congress from here, and because we have a neighborhood nicknamed “Little Mogadishu” in Minneapolis (we also have a place called “Little Canada” — I don’t know if it’s on the Chucklefuck Twins’ itinerary).

Wohl mentions that he thought he was in the movie Black Hawk Down when he drove into the Cedar-Riverside neighborhood. Right. This place. 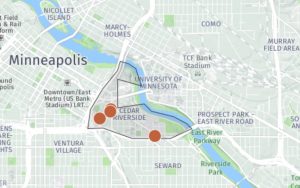 That, by the way, is the “third world ghetto” he’s complaining about. It’s located right around the West Bank of the University of Minnesota campus. I’ve been there many times — without an armored car. If you want to try some African food of all varieties, not just Ethiopian, it’s the place to be. (I wonder where the Chucklefuck Twins are dining tonight? I doubt that they’ll be taking advantage of their opportunities here.)

It’s also the nicest “ghetto” I’ve ever seen. I’ve been to neighborhoods in North Philadelphia that look bombed out and crumbling, but this is a pleasant part of Minneapolis. If you’re ever in the Twin Cities, you should explore it, because we’re not all Swedes with funny accents dining on potatoes and salt herring.

Good god but the Chucklefuck Twins are appallingly stupid bigots.