I was there once. I remember working in a research position where almost all of my colleagues were white men, and then getting a job where I had to work with large numbers of diverse students, and it was a major change. Fortunately, I buckled down and paid attention to all those workshops on bias and seminars on effective teaching, and I started out with a relatively large amount of respect for students with different backgrounds. You may think that it’s all administrative make-work, and that you just want to get back to work in the lab, and that it is the job of the students to accommodate you if they want to learn at your feet, but that’s not reality. You are part of a community of learning that includes students, and every part of the machine must be respected and treated well.

Learn that, and you won’t make the career-wrecking mistake this assistant professor did. 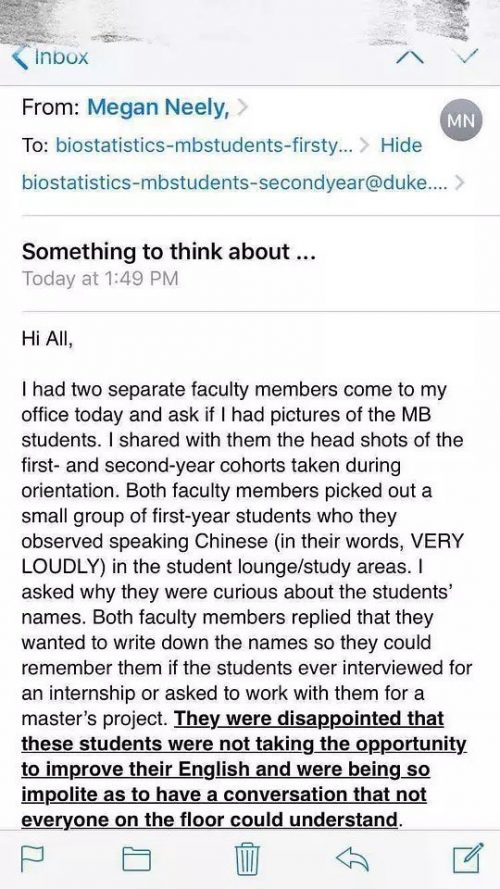 Although it may not be just her fault; that two other faculty members came to her to ask for help identifying wicked students who committed the egregious sin of speaking their native language suggests that there is a widespread problem at Duke University. I have two points to make about this remark: They were disappointed that these students were not taking the opportunity to improve their English and were being so impolite as to have a conversation that not everyone on the floor could understand. The first is that foreign students are going to get better practice in mastering English by listening to faculty in their classes, which are all in English, I ‘m sure, and by communicating with the majority native English-speakers in their community. Why are you seeking to hobble the ability of two fluent Chinese speakers to talk to each other? And second…why the hell do you think you have a right to listen in on the private discussions of students?

Also extremely dismaying is the implicit threat: they want to know the names of these students so they can deny them opportunities for internships or for work in their labs, and the department chair is amplifying that threat. This is completely unacceptable.

Megan Neely has resigned from her position as director of graduate studies in that program, which is entirely appropriate. No word on what happened to those nosy professors who wanted to blacklist a couple of students for a private conversation. It seems to me that this ought to provoke a major effort to get all the faculty in Duke Biostatistics into bias training, which will piss off a lot of them, but this is what happens when you neglect basic information on what ought to be university-wide standards for the people you promote to administrative positions. Apparently you all need to have your understanding of civil behavior refreshed.

Even old professors can royally fuck up and set a bad example for their colleagues, like this bozo: 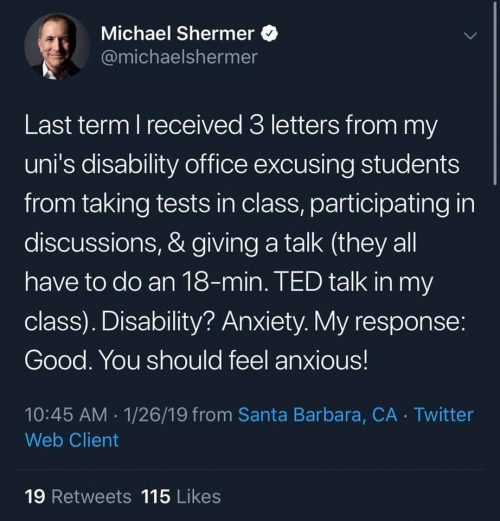 Yes. Anxiety is a disability. I’ve had students force themselves to come into my offices, voices trembling and sweat streaming off their faces, because they’re terrified of authority (it’s not because I’m scary, I’m a teddy bear — they were somehow afraid of big mean old people generally). I’ve had students seize up and break down at the prospect of taking a test, even when they were competent on the material. Every university has policies in place to tell faculty what accommodations they must make for disabilities. They have ways of dealing with these problems. Every semester I’ll have two or three students who come to me with a note that says they’re not going to take tests in class — instead, I drop off exams at the library, where they have quiet rooms where they take the tests in a supervised but consistent and less stressful environment. This is a good thing. My job isn’t to make students suffer, but to make sure they comprehend the science I teach so they can succeed in subsequent courses and in their careers.

The key thing to understand is that you are there to help students learn, not to create an obstacle course. When I teach a course in, for instance, ecological development, I’ll often include an assignment that involves public speaking in class — but if a student tells me that they’re totally wrecked at the thought, I’ll come up with an alternative that involves just as much work and allows them to demonstrate mastery of the material, because while public speaking is an important skill, it’s also not the primary subject of the course. Can you show me that you understand development? Good. I’ll recommend that they might want to take a separate course in communication in the appropriate department, or offer other options, like making a video for the class.

Maybe part of the problem is that people think they’re climbing a hierarchy and that they’re being given dominion over everyone with a lower rank, rather than that they’re joining a web of mutual responsibilities. Hierarchical thinking really does mess people up.

I keep turning down these honors » « The most disturbing news yet