I’ve been in this rodeo a few times: 3 children, 2 grandchildren. We’ve been through that period of anxiety where you want to know the status of the pregnancy, and somewhere early in the second trimester you find out the sex of the fetus…and it’s no big deal, except that it’s a landmark in development, so it’s always good to know that all is progressing smoothly. That’s it. We were not hung up on getting a boy or a girl, because you know they’re all good kids.

Some people, though, stage these elaborate events where they tell everyone it’s a boy or a girl. Really elaborate. Like this act of stupidity:

That was the start of the Sawmill Fire in Arizona — some dumbass had to set off an exploding target with colored smoke to show off whether a fetus had a penis or a vagina. And he just had to set it off in a dry, grassy, arid place. Look at that sere landscape, full of dry brush — you’d think anyone would be smart enough to know that this is not the place for a fiery explosion. 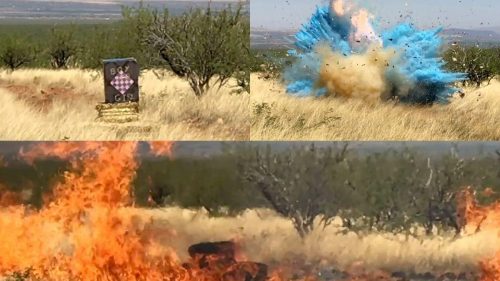 You’ll be pleased to know they’re having a boy, and they’ve also been slapped with a $220,000 fine. He got off really easy.

Before the fire was over, it had burned 47,000 acres and cost $8.2 million to extinguish, with nearly 800 firefighters battling the blaze.

His name is Dennis Dickey, and he’s a border patrol agent. I hope this idiotic act haunts him for the rest of his life. Maybe he can explain it to his son.

All aliens are welcome to participate in our ExoLife Hangout » « Is it progress when a self-aggrandizing mad scientist performs a reckless experiment?