That mostly sounds great, doesn’t it? It is an essential vitamin, it’s good for you, and it has a really good safety profile. It’s easy to get the required dosage from a healthy balanced diet, so, honestly, taking megadoses does nothing, no harm and no advantage, and only, as they say, helps you make more expensive pee. 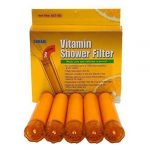 But you know what’s totally pointless? This new product of selling people Vitamin shower filters. You attach it to your shower head, and then get an extremely dilute solution of Vitamin C topically applied, most of which then runs off into your sewer. If the dose makes the poison, it’s also the case that you need a minimally effective dose to get the benefit, and this mainly looks like a new way to get money to bleed out of your wallet. Have an orange, eat some strawberries or broccoli, all far more effective at getting the vitamins you need.

If you want to remove chlorine, these filters simply can’t do the job — you’d have to reduce the flow rate to a trickle, optimistically. They’re a scam. They take a little bit of truth and amplify it non-quantitatively and with no empirical analysis, and try to sell it to you with phony promises. Don’t fall for it. If you have a condition that would benefit from topical Vitamin C, see a dermatologist.

I knew it! » « I think we can definitively argue that Elon Musk has a cult