Classic conspiracy theories galore at this facebook page, United 4 Truth. But also this: 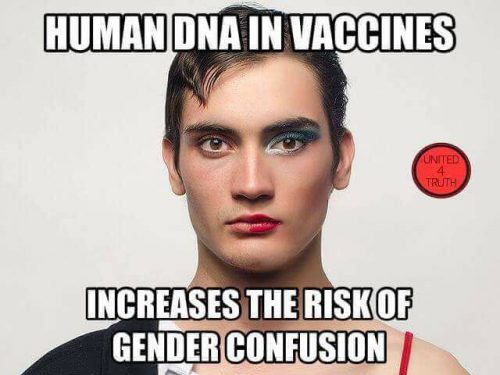 Do you want the explanation that goes with this? No? Too bad, I’m going to inflict it on you anyway.

How does human DNA in vaccines contribute to the rise of gender identity confusion?

Now we have an onslaught of BOYS who think they should be GIRLS.

Do we have male DNA in vaccines? YES! MRC-5 is the code given to the fetal cell line also used to cultivate vaccine viral components, and it comes from a MALE aborted fetus. Do we have girls thinking they are boys? YES! Is it as prominent as boys wanting to be girls? NO!

These vaccines contain negligible amounts of human material — the cells are used to produce the viruses that are purified for injection. Also, even if you are injected with fragments of human chromosomes, that doesn’t imply that your cells will incorporate them into their genome, so chromosome dosage is irrelevant.This is like suggesting that if you drink milk, you’re actually swallowing whole cows, and this explains why some people say “moooo.”

Iliana Myers Hughart makes me a Grandpa2 » « Labels, and the saga of Cornerstore Caroline