As usual, I’m torn. Is the answer to one ugly, pretentious monument to superstition to put up another ugly, pretentious monument to superstition? It’s the strategy we seem to be going with, anyway, because apparently too many people are able to grasp abstract principles. So the Satanists are trying to erect a statue to Baphomet in the Arkansas capitol. 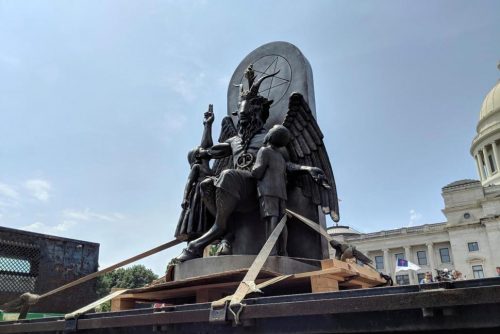 I get it, really I do. They’re highlighting the hypocrisy of government favoring one religion over another. The Satanists understand that, too.

Satanic Arkansas cofounder Ivy Forrester, who helped organize the rally, said “if you’re going to have one religious monument up then it should be open to others, and if you don’t agree with that then let’s just not have any at all.”

It’s especially true when one of the advocates for putting up a Ten Commandments monument, Senator Jason Rapert, says this sort of thing.

In an online statement, Rapert said he respected the protesters’ First Amendment rights, but also called them “extremists” and said “it will be a very cold day in hell before an offensive statue will be forced upon us to be permanently erected on the grounds of the Arkansas State Capitol.”

OK, fine. I consider Southern Baptists to be extremists, and the Ten Commandments to be a terrible set of laws, and celebrating them with an offensive statue to be a violation of my rights. I guess every day is a cold day in Hell in America.

Besides, the Christian monument is also ugly. It looks like a damned tombstone. 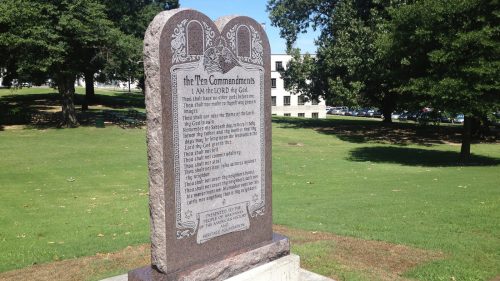 Let’s just not have any at all, OK?

Happy Birthday, Yemmy! » « That’s a swift death on a cellular scale, not a slow one