I know I’m not. I’ve disliked the posturing phony from day one, so it just confirms my suspicions to learn Musk has been a major Republican donor — he just keeps quiet about it.

Tesla and SpaceX CEO Elon Musk has been revealed as a top donor to a Republican PAC aimed at keeping control of Congress. Filings published by ProPublica this weekend show Musk contributed $38,900 to the Protect the House PAC, joining the likes of casino magnate Sheldon Adelson and Houston Texans owner Robert McNair in the PAC’s top 50 donors. The PAC raised more than $8 million in the second quarter for Republican lawmakers hoping to fend off Democratic challengers. Musk has a history of donating to both parties, but contributions to the Republican Party raised eyebrows on Twitter, where many questioned how the “socially liberal” billionaire vowing to fight climate change could support the GOP’s platform.

I’m going to guess that Jon Rosenberg wasn’t fooled, either. 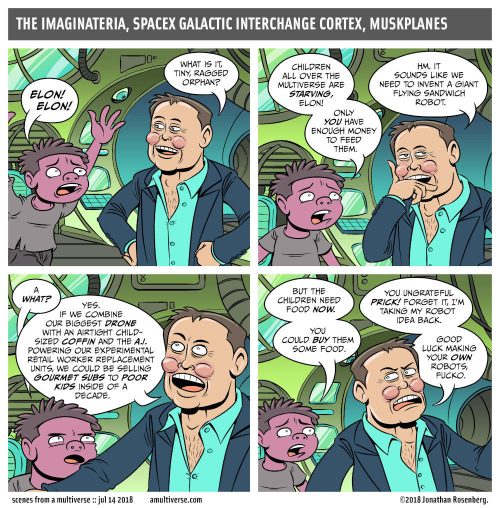 I’m also going to guess that people will pop into the comments to defend him by saying that the wealthy tend to donate to both parties all the time. I will ask…why? Doesn’t that tell you the system is broken already? It should also tell you that both parties tend to favor the rich, so the rich are happy to keep the wheels churning — they know that no matter who wins, the bankers and trust-fund babies and Wall Street will prosper, no matter how much the economy is wrecked otherwise.