But he’s such a holy man! 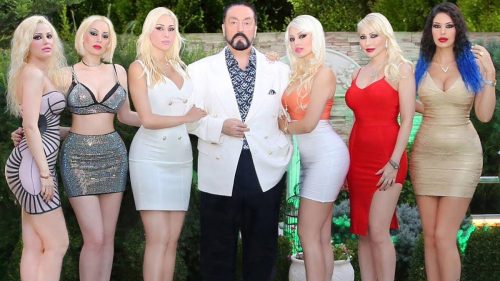 The guy who authored that genuinely bizarre creationist text, The Atlas of Creation, and who ran a weird television program featuring heavily made-up “kittens” robotically endorsing young earth creationism, seems to have fallen spectacularly in a bust by the Turkish government. Singing the praises of the Turkish dictator, Erdogan, doesn’t seem to have helped him.

Notorious Muslim televangelist Adnan Oktar, known for leading a cultish group, was arrested by Turkish police in Istanbul on Friday over a number of serious charges, including forming a criminal organisation, sexual abuse of children and sexual assault.

Police said they are conducting a widescale operation led by the financial services department spanning five Turkish provinces. Authorities are looking to detain 235 of Oktar’s followers, and police said they had detained around 150 so far.

It’s clearly not just the arrest of a single man, but a huge crackdown on the entire cult. I have no sympathy for Oktar and his perversity and foolish ideas, but I also don’t much care for tyrannies and totalitarian police states. He’s a crook and a fraud — fine, arrest him for financial improprieties. He’s running a sex cult — pick him up for human trafficking and assault. I’m not too keen on arresting him for violating religious purity.

“There are certain religious references [on his TV show] and he makes belly dancers dance. Is such a thing possible? He has most likely lost his mental balance. He now says he is a freemason but he was punished previously for his remarks about freemasonry,” Erbas said.

“He was also jailed for insulting [founder of modern Turkey Mustafa Kamal] Ataturk in the 1980s and 1990s, But now he speaks of himself as the greatest Kemalist. He’s a corrupted person.

“It is not right to watch a TV channel like his,” Erbas added.

You know, it’s not as if they lacked sufficient grounds to charge him on serious crimes without arresting him for featuring belly dancers.

Wow. Wouldn’t want to be him. I think we can now say that the biggest organization in Islamic creationism has been thoroughly crushed.

They dream of becoming the thought police » « Facebook lies