A woman working in a fisheries office in Scotland complained about the sexist, abusive workplace culture there. The boys in the office responded by tying her to a chair and gagging her, and took photos of her humiliation. 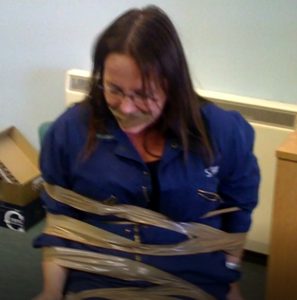 In evidence to her ongoing tribunal, she said that one of the men involved, fisheries officer Reid Anderson, told her: “This is what you get when you speak out against the boys.”

The boys. The boys in that office are a bit thick, I guess — “There ain’t no sexist abusive culture here, and to prove it, we’re going to do a little bondage here in the office to intimidate you. And to make it even more clever, we’re going to take incriminating photos of it.”

Sexist, abusive, and stupid. They’ve got a troop of dull-witted boys managing fisheries in Scotland? That’s not good.

Let’s check in on upper management, shall we?

The manager said he would have “a word” with the men involved – Reid Anderson and Jody Paske.

He added: “I am sure they meant no harm and that was the boys just being boys.”

This sounds like one of those workplace comedies that come out of the UK, with a staff of incompetents bungling amusingly while the twits running the show have their own brand of oblivious boobery — think “The IT Crowd” or “The Office”. I didn’t know those shows were actually documentaries.

Sack the whole lot, is my recommendation.