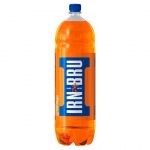 The organization run by our coke-guzzling president has just banned Irn-Bru from their golf courses in Scotland, because, they say, it stains the carpets. It’s a lie. I’m pretty sure that it’s because its iron content — I understand it’s made by dissolving an entire medieval claymore into each bottle — makes the Scots unstoppable in any athletic competition, and we all know how much Trump hates to lose.

(I have drunk the stuff, and it’s OK — it’s got a distinctive and vaguely medicinal flavor. I recommend sticking to the whisky. It’s the top selling soft drink in Scotland, though, so this is kind of a rude order.)