Incels. Jesus. This is how most of us see them: nasty little creeps who can’t imagine women as independent human beings, who see women as tools for their gratification. 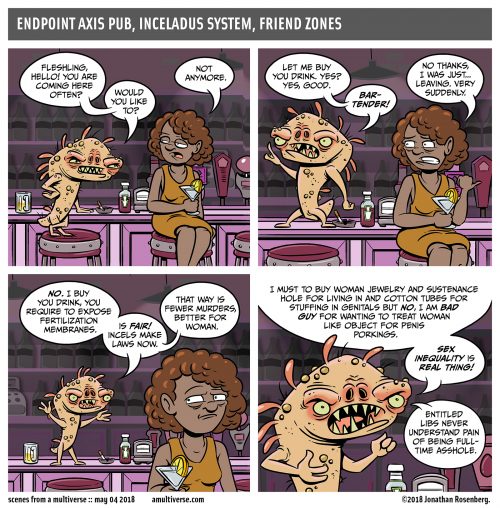 Once upon a time, I would have assumed everyone would recoil in disgust at the murderous selfishness of incels, but I guess I was wrong. Here’s how Ross Douthat sees them:

One lesson to be drawn from recent Western history might be this: Sometimes the extremists and radicals and weirdos see the world more clearly than the respectable and moderate and sane.

What he’s setting up is the argument that maybe the incels are right, and that maybe everyone is owed sex to some degree, and he’s going to bring in an “authority”.

…it brings me to the case of Robin Hanson, a George Mason economist, libertarian and noted brilliant weirdo. Commenting on the recent terrorist violence in Toronto, in which a self-identified “incel” — that is, involuntary celibate — man sought retribution against women and society for denying him the fornication he felt that he deserved, Hanson offered this provocation: If we are concerned about the just distribution of property and money, why do we assume that the desire for some sort of sexual redistribution is inherently ridiculous?

After all, he wrote, “one might plausibly argue that those with much less access to sex suffer to a similar degree as those with low income, and might similarly hope to gain from organizing around this identity, to lobby for redistribution along this axis and to at least implicitly threaten violence if their demands are not met.”

Robin Hanson is also icky. He’s another example of how libertarianism is a corrupt ideology of greed that is destructive to the social contract. And he’s a tenured professor!

It’s a disquieting example of how what we might call hyper-misogyny has crept into academic discourse via sexually frustrated and clearly angry men who believe men are not only entitled to sex but entitled to sex with women they find attractive. It’s not lost on me by any means that the idea that women owe men sex is not at all new. But this is a new frontier in embedding these ideas into formal public policy proposals, particularly ones that ape the language of rights and equality in much the same way modern racists groups do.

That these people are making analogies to the redistribution of wealth is particularly odious. Such a comparison falls apart quickly, for a couple of reasons.

Wealth redistribution is about flaws in capitalism. The system encourages cheating: you can leverage inequities to cause undeserved gains to those individuals who have initial advantages in capital — it is not a system that rewards effort and skill, but one that gives the ones with the mostest more. If you want to talk about fairness, and fair distribution, and equality of opportunity, you’ve just removed yourself from any possibility of doing that within the context of capitalism (or its even more pathological brother, libertarianism), because those words don’t exist in that context. “We ought to share fairly, just like we do in capitalism” is a nonsense sentence.

Unlike money, you can’t accumulate sexual desirability by stealing it from others — it’s not something that can be gathered at the expense of others. And it can’t be redistributed. You can’t arrest Scarlett Johansson for hoarding sexiness, and fine her for 3.2 pounds of good looks, which are then to be given to PZ Myers, who was clearly a bit of a loser in the attractiveness sweepstakes. It just doesn’t work that way. So instead they want to think that sexual attention is something they can demand, that it would be “fair” to insist that attractive people and women in general be compelled to surrender their autonomy. Not just their money, or possessions, but their selves in involuntary service.

Isn’t it odd how a philosophy of individualism and worship of liberty has now come around to arguing for depriving individuals of their freedom…as long as they are young attractive women? The only way they can do that without their heads exploding over the conflict is by denying the humanity of women, which is apparently something conservatives are comfortable with. No surprises there, I guess.

Again, this is a consequence of the near-religious worship of dogmatic capitalism. Everything is viewed as a transaction, with profits and losses, with numerical values that can be auctioned off. Every time someone utters the evil phrase, “sexual market value”, you are hearing the canonization of a true perversion of human relationships. But this isn’t how sex works! It’s a gift of shared intimacy, voluntarily given, between two or more people. You can’t compel that (which is not to say that some generous people can’t give it in return for money — but even that is a willing exchange. Sex work isn’t rape. Rape isn’t sex work.)

That leads into the other problem with Douthat’s perspective. Incels aren’t just young men howling in frustration for more sex, because heck, that would be almost every human being going through puberty. These are people who want to punish and kill women for being objects of desirability, who have so twisted their idea of sex that it becomes nothing but a violent act in their minds. All the talk of impractical policies of sex redistribution is a smoke screen, irrelevant to the real issue: these are horrible damaged people who think murder for the sake of their penises is justifiable, and who have such a misbegotten idea of what sex is that they think hatred and violence will satisfy their sexual urges.

Of course, Douthat is just using this as a stalking horse for his own brand of sexual perversity.

There is an alternative, conservative response, of course — namely, that our widespread isolation and unhappiness and sterility might be dealt with by reviving or adapting older ideas about the virtues of monogamy and chastity and permanence and the special respect owed to the celibate.

Those “older ideas” also involved demanding the submission of women and denying them autonomy, it was just a more genteel version of the same resolution, where a wealthy gentleman with an income above £10,000 a year could purchase a young lady of good breeding to be his kept spouse, once again reducing everything to a simple quantifiable transaction, where the women are kept in line with an absence of capital.

Do I even need to touch that Catholic nonsense of special respect owed to the celibate? Why? What does celibacy add to the virtue of a person…especially when so often it was only the appearance of abstinence?

Friday Cephalopod: Nice house » « I must be getting old and jaded