I have just learned about something called tweetdecking. You and your buddies form a secret group in which you agree to re-tweet each others’ words, gaming Twitter into thinking you’ve all got vast social reach and influence, and then — this is the key step — you offer to re-tweet other peoples’ words for a payment of a few dollars each. It sounds stupid, and it is, and like this can’t possibly work, but it does.

Customers, which can include both individuals and brands, pay deck owners to retweet one or more of their tweets a specified number of times across deck member accounts. Some decks even allow customers temporary access to the deck, almost like a short-term subscription to unlimited deck retweets. Single retweets tend to cost around $5 or $10. Week- or monthlong subscriptions can cost several hundreds of dollars, depending on the deck’s popularity.

“It’s the simplest thing ever, all you do is have your friends join and you have fun and tweet and make money,” Kendrik, aka @Simpnmild, an 18-year-old from Chicago who runs two of his own decks, said. “It’s the easiest thing ever. No hard work at all.”

As the owner of two decks with about 15 people in each, Kendrik works with all sorts of people and brands who want their tweets seen by the deck’s massive collection of followers. These customers pay a few hundred dollars to gain temporary access to the Tweetdeck so they can retweet themselves across several of the powerful deck accounts, pretty much ensuring it goes viral.

Kendrik said he makes between $3,000 and $5,000 a month doing this, and he pays members of his deck “based on who has the most page activity for the month” via PayPal.

I’m sorry, teens might be nice people, but they don’t usually have much experience, and don’t generally have great insights to share. There are exceptions, of course, but these don’t sound like kids who do yet. They’ve got a social media racket and that’s about it.

Worse, many don’t have anything creative to say — they “steal” tweets.

I’m so naive I didn’t even know you could do that. I guess it involves finding clever tweets, and then copy-pasting them as if you wrote them, without acknowledging the true author. I would have called it plagiarizing, but OK.

Anyway, Twitter hasn’t yet figured out how to shed the Nazis on their service, but at least they’ve now begun to purge the site of unoriginal, boring, shallow teenagers, who are all very sad about losing thousands of dollars every month. 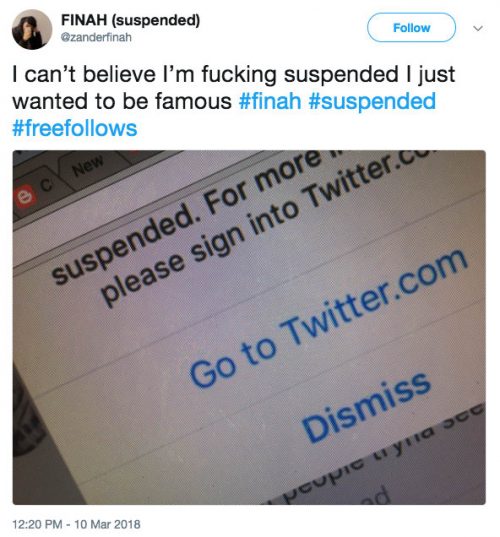 Whoops, I made another video » « Happy Birthday, Lisa