This is a wonderful 19th century photo of a famous person from the Pacific Northwest — the daughter of Chief Seattle, dubbed Princess Angeline. I knew about her when I was growing up, and Chief Seattle, too, since they’re such key figures in the history of the area, and I’ve seen this photo many times. That is a strong and dignified face. 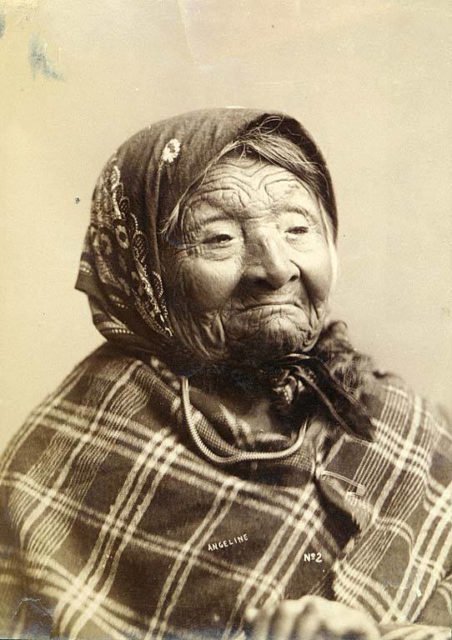 But I’d never known how she came by such a European name, until now. It’s a genuinely cringeworthy story.

Born in 1820 in Lushootseed, near modern day Seattle, Kikisoblu (Kick-is-om-lo) was the first daughter of Chief Seattle, the leader of a Suquamish Tribe (Suquamish) and Dkhw’Duw’Absh (Duwamish). When American settlers arrived in Seattle, Chief Seattle befriended one of them, David Swinson “Doc” Maynard.

When the second wife of “Doc” Maynard, Catherine Maynard, saw the beautiful Kiksoblu, she said, “You are too good looking for a woman to carry around such a name as that, and I now christen you Angeline.”

Kikisoblu is a lovely name! In fact, all the Coast Salish place names that dot Western Washington are pretty and resonant — so it’s odd to see that kind of dismissal. And the Maynards have a reputation as being the early settlers who were most sympathetic to the natives. (Shhh, don’t tell anyone, but the pioneers that named a city after an Indian chief were mostly brutal, violent, and aggressive towards the people who lived there first — Seattle itself was a permanent collection of Coast Salish villages that had existed for about 4,000 years before the Europeans showed up. Surprising, I know.)