Fascinating — models in software games have some subtle but intentional design features. There is a game character in Overwatch (which looks like a fun game, but since it’s PC only, I’ve never tried it) named Tracer who was the focus of some controversy a while back because some of the promotional materials emphasized her lovely, shapely butt maybe a bit overmuch. Now there has been a detailed analysis of the design of her character to identify what makes her butt so nice in every view.

Wu discovered that the primary cause of Tracer’s plump backside is an inhumanly deep buttcrack. In fact Tracer has a butt crack so deep that regular humans could not possess similar physiology and survive. Such a crack would inevitably interfere with organs and the body’s structural integrity.

As a result of this bizarrely deep posterior, Tracer can be put in literally any pose, under any lighting, and her butt will still cast a shadow implying depth, plumpness and tautness. The way Tracer’s bottom is emphasised in any situation is a genuine feat of engineering.

On top of that, there’s more. Another aspect of Tracer’s butt that plays a big part in its eternal visibility is the fact that her outfit is either impossibly tight or glued to her ass cheeks. 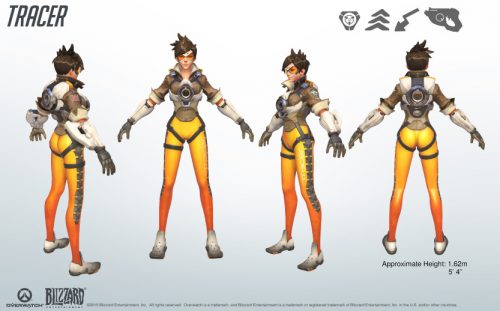 Take a look at the image on the far right. Natural fabric would find a resting point between the peaks of the two cheeks, naturally bridging the gap. If the material pulls in to show cheek definition, this would be the result of both cheeks physically trapping the fabric. This is different, in that the fabric follows the contours of the cheeks and buttcrack without the two cheeks making contact. For the titillation of boys and girls worldwide, Tracer suffers a permanent wedgie that is literally designed to make her individual butt cheeks shine.

Wait, but what about realism? What about ethics in gaming?

We’ll get to that once I’m done marveling that there is such a thing as virtual butt analysis, and that there are game designers and artists working hard to maximize butt exposure.

Nature is also working on it. Check out Jon Snow’s butt.

WRAPTOR! » « Texas continues its backward slide into the Middle Ages