Yvette d’Entremont might have pissed off David Avocado Wolfe with her article, DAVID AVOCADO WOLFE IS THE BIGGEST ASSHOLE IN THE MULTIVERSE, because he went on an angry Twitter spree against those damned people who think science works recently. Or maybe he just howls angrily all the time…I don’t know, it seems like that’s the latest thing for big assholes, just spluttering away on the Twitter. I wonder if historians will look back on this decade, wonder what people were thinking, and call this time the Twitting Twenty Teens (I’m kind of afraid there won’t be any historians looking back on the next decade, and if there are a few survivors, they’ll call it the Smoldering Wreckage of the Twenty Twenties.) 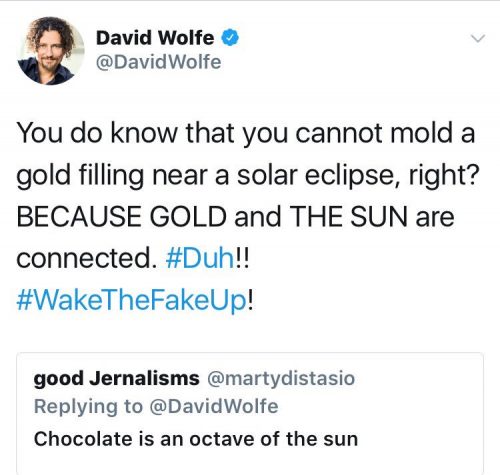 You see, gold cannot ‘crystallize’ during a solar eclipse because, like Superman, it derives all of its power from the rays of our yellow sun (just to remind you, the nonsense about “wavelengths” and “vibrations” is common currency in nerd literature, as well as in the New Agey BS), while similarly, silver will not solidify during lunar eclipses, because obviously, it shares mystical wavelengths with the moon.

Wolfe does not explain how he knows this. He also does not give details; is it only in the track of totality during the brief period of the eclipse that gold and silver become recalcitrant, or is it worldwide? Do the metals just mold more slowly during a partial eclipse? Do dentists find that gold fillings set more rapidly if they make them in front of a sunny window than if they do them under fluorescent lamps? How does gold and silver ‘know’ what wavelengths are bouncing around in the room? Inquiring minds want to know, because we could actually test this claim. Woo-woo minds don’t want us to know, because we could actually test this claim.

It reminds me of the time back in the Dismal Nineties made the mistake of telling us that gelatin would not set during a void-of-course moon. He gave us all the details we needed, and since gelatin is cheap and easily available, so guess what a number of us eagerly did? We tested his claim!

The annoying thing, too, is that if Wolfe did give details, which he might do since he is the Biggest Asshole in the Multiverse, there are people who would waste their time while in the eclipse of doing the experiment of testing the physical properties of certain metals. There will be no change. And afterwards, like my astrologer, he’ll invent new excuses for why it didn’t work.

Demand that he demonstrate the phenomenon first, and document it. Or better yet, ignore him, because he is a big lying asshole.