I had no idea how deeply Eugene McCarthy had descended into absurdity. He’s arguing that humans have hybridized with…chickens. 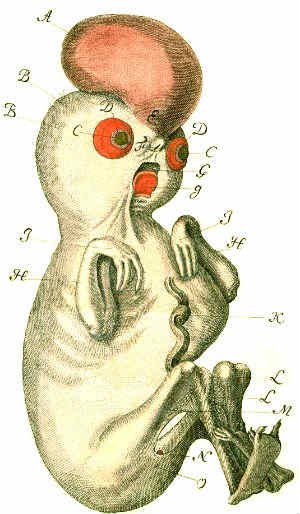 His ‘evidence’ consists of mythological accounts (satyrs are evidence of goat-human hybrids, for instance), and terrible stories of women who had grossly deformed stillborn babies with peculiarly warped features that, if you impose your biases on them, can be seen to vaguely resemble other animals. These are always severe teratological defects, but McCarthy always interprets them as hybrids. The Hühnermensch, or chicken-baby, drawn above is an example. That’s not a comb growing out of its head, but its brain — this is a condition called exencephaly. It often occurs as a precursor to anencephaly, because usually that bubble of extruded brain matter will degenerate. His ape-human ‘hybrids’ are all photos of anencephalic stillbirths.

It’s a rather disgusting section of McCarthy’s work, not just because the pages have lots of images of tragic and almost always lethal birth defects, but because he misinterprets them as evidence that the mother, who has already suffered enough with the loss of a baby, must have also become pregnant by having sex with an animal.