This is not what teachers are supposed to do, and in fact, this is kind of the opposite of a teacher’s role. A teacher at Anthony Aguirre Junior High handed out fake certificates, including one labeled ‘most likely to be a terrorist’, to kids, while other teachers laughed. It’s just a joke, don’t be so sensitive, yadda yadda yadda.

And if that wasn’t appalling enough, another teacher also handed out fake awards to their kids, including “most likely to blend in with white people” to a black student. 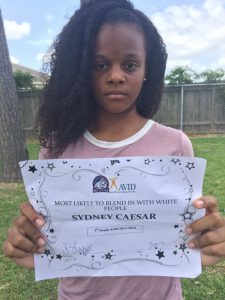 Did they think that was a compliment? Because that would be all kinds of fucked up, too.

The school administration has clammed up — they say these teachers will be ‘disciplined’. I have no idea what that means, nor does anyone, and it does no one any favors to fail to be transparent about these sorts of problems.

It sounds to me, though, like there are some teachers at that school who are not suited to their profession and need to find new jobs.