A reader let me know that I was mentioned on the March for Science Seattle page. 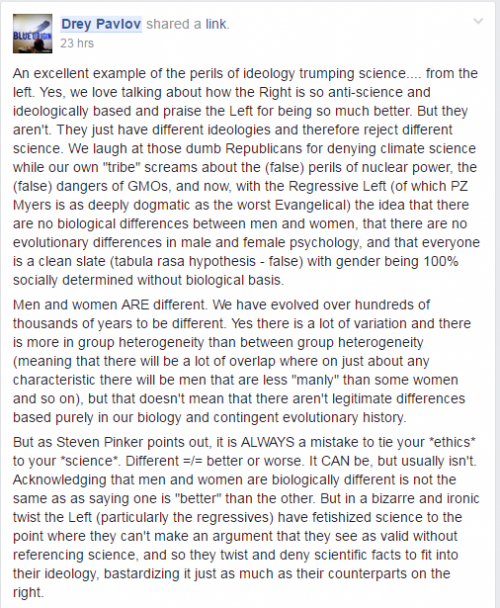 An excellent example of the perils of ideology trumping science…. from the left. Yes, we love talking about how the Right is so anti-science and ideologically based and praise the Left for being so much better. But they aren’t. They just have different ideologies and therefore reject different science. We laugh at those dumb Republicans for denying climate science while our own “tribe” screams about the (false) perils of nuclear power, the (false) dangers of GMOs, and now, with the Regressive Left (of which PZ Myers is as deeply dogmatic as the worst Evangelical) the idea that there are no biological differences between men and women, that there are no evolutionary differences in male and female psychology, and that everyone is a clean slate (tabula rasa hypothesis – false) with gender being 100% socially determined without biological basis.

Men and women ARE different. We have evolved over hundreds of thousands of years to be different. Yes there is a lot of variation and there is more in group heterogeneity than between group heterogeneity (meaning that there will be a lot of overlap where on just about any characteristic there will be men that are less “manly” than some women and so on), but that doesn’t mean that there aren’t legitimate differences based purely in our biology and contingent evolutionary history.

But as Steven Pinker points out, it is ALWAYS a mistake to tie your *ethics* to your *science*. Different =/= better or worse. It CAN be, but usually isn’t. Acknowledging that men and women are biologically different is not the same as as saying one is “better” than the other. But in a bizarre and ironic twist the Left (particularly the regressives) have fetishized science to the point where they can’t make an argument that they see as valid without referencing science, and so they twist and deny scientific facts to fit into their ideology, bastardizing it just as much as their counterparts on the right.

I’m also a biologist. I know the difference between a testis and an ovary, between a Mullerian duct and a Wolffian duct, between testosterone and estrogen (which, in the latter case, isn’t much). I’m also fairly well acquainted with the literature in evolutionary biology, and even know a bit about neuroscience.

What he’s doing is a common rhetorical trick. It’s obvious that most men have a penis and most women have a vagina, therefore, with a bit of clumsy sleight of hand, he wants to claim that every bit of cultural bias about the relative abilities of men and women is equally valid. He wants to pretend that because ovaries exist, all his notions about femininity must be equally rooted in biological reality.

Similarly, he reveals his hand with that odious Pinkerism about blank slates — that’s exactly the same game! Argue that some element of human psychology is not fixed by genetics and that it arises in a social context, and you are castigated by Pinker fans who like to bring the discourse to a dead stop with the ludicrous accusation that you must believe everything is 100% socially determined without biological basis. It’s idiotic and dishonest, but right now it’s Pinker’s main claim to fame.

Some things are complex and culturally determined. Biological sex is strongly canalized to produce a bimodal distribution of physical properties, but intersexes do exist. The brain is a plastic organ that responds to its environment in sophisticated ways, and carries both predispositions and the potential to develop in new ways, and gender is less strongly specified by genes than is the reproductive tract. If anyone is anti-science, it’s these people who want to argue for a less responsive, less adaptive, less diverse pattern of possible behaviors from the human brain.

You don’t get to claim that you have a solid biological footing in arguing that women are more nurturing, are less capable of doing math, and prefer the color pink because estrogen unless you’ve done actual work to demonstrate that those differences are real. Breasts aren’t your shortcut for imposing a mass of narrow Victorian cultural prejudices on how people should be, and you don’t get to hide behind science on this one.

Also…hiding behind trivially exposed lies isn’t science, even if some of your scientific heroes who try to defend a regressive conventionality think so.