Uh-oh. I agree with this. Lutherans are a terrible people who have inflicted much pain and suffering on others in their history, and if we’re going to start discriminating against people for their religion, it’s a fine place to start. 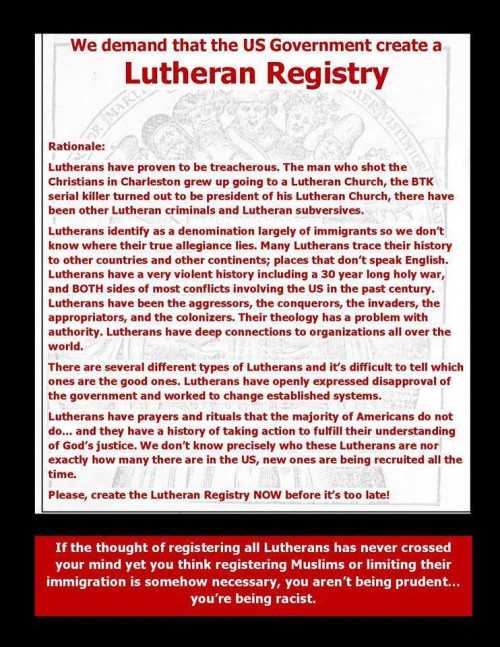 But…but…I was brought up as a Lutheran. I’ve since renounced the faith, but my driver’s license does say “Minnesøda”, and I’ve got Scandinavian grandma stories to tell, and I know a few Ole & Lena jokes, and I might be able to remember a verse or two of “A Mighty Fortress Is Our God”. This is probably enough to indict me, especially since our country’s new Muslim ban doesn’t give a flying goddamn about what people think, but just makes sweeping prohibitions based on country of origin.

I also probably belong on the list because hot dish and weak church coffee are enough to inspire me to contemplate revolution already.

I was worried for a moment that I’d also have to be on the atheist registry, but the ongoing alignment of that philosophy with neocon principles might actually counterbalance the Lutheran entanglement. Unless it’s an SJW Atheist registry, then I’ll be doubly damned.

Flood the phone lines » « How has your weekend been so far?