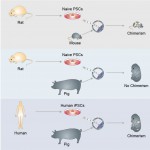 Calm down, people. Nobody is making human-pig hybrids, even if the news is making a big deal about it. To be honest, I’m not even very impressed with the utility of the experiment, although it is interesting and technically accomplished. It’s being touted as a step in developing pigs with human-derived organs for transplants, and no, I just don’t see it.

The experiments involve xenografts in the blastocyst; that is, they take pluripotent stem cells from one organism, and inject them into the embryos of a different species at a very early stage of development, when the embryo is a hollow ball of cells with an inner cell mass that will eventually become the fetus proper. Then they look for incorporation of the injected cells into the embryo.

It doesn’t always work. The inner cell mass doesn’t necessarily accept these alien cells, or the injected cells don’t thrive in this unusual environment, so you might do the injections, implant the resultant hybrids, and when you open up the host days or weeks later, your injected cells are all gone. It is non-trivial to get this to work, so what they’ve accomplished is technically impressive.

It was a lot of work, too. They injected 2,181 pig blastocysts with human pluripotent stem cells, cultured them in vitro for a few days, and had 2075 embryos that were then implanted in masses of 40-50 embryos into host pigs (which implies that many would be expected to be lost), and collected 186 embryos about 4 weeks later. This is a good yield — I’ve done experiments with much lower rates of success — but the real question is whether any of the human cells were incorporated into the pig embryos.

It worked! They got incorporation of human cells into the pig embryos. Unfortunately, there are a few problems: one is that the embryos with incorporated human cells were significantly retarded in their growth. This ought to be expected; just the timing of development for the two kinds of cells will be out of sync, so I’d actually have expected even greater problems. It’s promising that they got incorporation at all. The other problem is that the incorporation was very low: 0.001% of the embryo’s cells were human. Uh, that’s not very good. If you’re trying to generate organs grown in pigs that have exclusively human antigens, even 99.9% human isn’t going to be good enough — it’s going to trigger an immune response when transplanted.

None of these cells made up the majority of cells in any organ, even; the experiment doesn’t really test the feasibility of accomplishing that, and I suspect that trying to increase the percentage of human cells is going to also increase the incompatibilities and lead to greater and greater rates of developmental failure. They do have some interesting ideas for increasing the rates, though. If the host pig cells are transgenically modified to make them unable to make a pancreas, for instance, any pancreas in the pig would have to be derived from human cells. It would still be infiltrated with pig-derived nerves and blood vessels and connective tissue, though, so that’s insufficient to create a transplant-ready organ.

As pure basic research, it’s a good experiment, and I’ll be interested to see how much further it can go — if nothing else, it’s going to expose evolutionary disparities in development between different mammalian species. The head investigator has an appropriate perspective on it, I think:

Scientific American: So this is very, very basic biology?

JCIB: So I feel that there has been a little bit of exaggeration of where we could go with this now. If you look on the Internet you see images of chimeras between human and animal. And I feel that that’s a little bit of exaggeration. It’s true that it works very nicely between rat and mouse — just this experimental protocol that I am telling you. It’s only a couple of months ago that we have been able to put human cells into another animal. In this case in a mouse and realized that they can differentiate in the three germ layers. The three germ layers are the mesoderm, ectoderm and endoderm that will give rise to the more than 250 different cell types. So that’s a major accomplishment I will say. But from there, dreaming that they will generate a functional structure, I think we’re going to need time and a lot of luck.
So we need to go for a lot of basic research still. It’s my own feeling, of course. There are other people who think that tomorrow we are going to create human organs. And I wish that I am wrong and they are right, but I think it will take time.

Yes! It’s basic research, which is a grand and worthy thing. It’s too bad so much of the press coverage can only grasp it in terms of making organs for human transplantation — I doubt that this approach will ever work for that, but will instead teach us more about development and evolution and molecular biology.

Friday Cephalopod: I need a better excuse » « Charles Blow tells it like it is