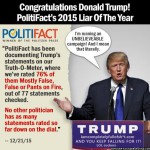 We need more of this kind of truth-telling:

Donald Trump is a proven liar. He lies often and effortlessly. He lies about the profound and the trivial. He lies to avoid guilt and invite glory. He lies when his pride is injured and when his pomposity is challenged.

Indeed, one of the greatest threats Trump poses is that he corrupts and corrodes the absoluteness of truth, facts and science.

This is the straight talk you don’t usually get in our cautious, conservative, cozy-with-evil media: you get “euphemisms like “unsubstantiated,” or “unproven,” or “baseless.”” This has to stop.

We all have to adjust to this unprecedented assault on the truth and stand ready to vigilantly defend against it, because without truth, what’s left? Our president is a pathological liar. Say it. Write it. Never become inured to it. And dispense with the terms of art to describe it. A lie by any other name portends the same.

Our president is a LIAR. Say it loud.

Of pigs and people » « Y’all are heroes