Christianity has a martyr complex. They always think they’re being persecuted, when they’re not — so you hear constantly about Romans throwing them to lions, but never about how Christianity coopted the Roman imperial bureaucracies, and eventually the emperor himself, to rule over the Western world. They claim that Hitler was an atheist, ignoring the fact that he banned Darwin, not the Bible, had the support of the German Catholic church, and encouraged faith in his people. So I knew exactly where this cartoon would have to go, if it were at all honest. 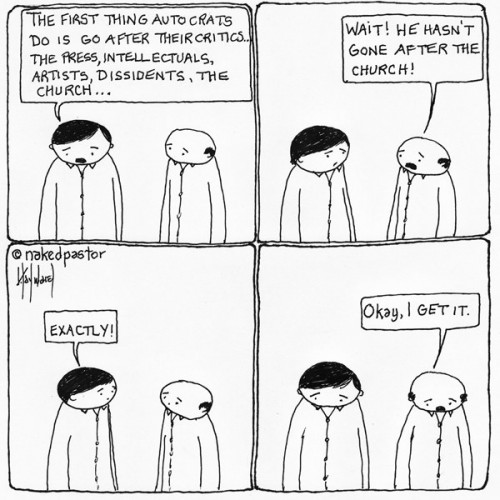 Our current autocrat is supported by Christian evangelicals. Damn few are hanging their heads in shame (although, to be fair, some are).

Let’s face it, though: the success of the Christian religion has partly rested on its eager willingness to aid and abet authority, unlike, for example, Judaism. Mainstream Christianity has been an enabler, not a critic, of secular authority, no matter how oppressive it may be. There have been exceptions — liberation theology, for instance — but then the Church turns to oppose and oppress them.