I find myself repelled by the color pink anymore. It’s basically been appropriated by the Susan G. Komen Foundation to represent research on breast cancer, and it’s as if daubing pink paint on something suddenly makes it an accomplishment in cancer research. 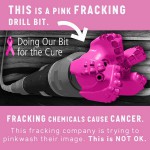 So we had pink drill bits. Fracking for the cure!

Pink fighter jets! Strafing and bombing for the cure!

They cut support for Planned Parenthood! Who needs mammograms and education when you’ve got drill bits and bullets?

Susan G. Komen has long held deep ties with right wing groups. Now we learn that another aspect of those ties is that they have scheduled major fund raising events at Donald Trump’s Mar-a-Lago.

Komen has held their annual “Perfect Pink Party” at Mar-a-Lago since 2011, and Trump has attended throughout the years. The AP reported today that the party is still planned for January 2017, and that the organization won’t make a final decision about whether to go ahead — or cancel and lose the deposit — until after October. Komen spokesperson Andrea Rader declined to comment beyond the AP story.

Nancy Brinker, who is the founder and chair of Global Strategy for the Komen Foundation [but who is currently on leave] endorsed Trump earlier this year.

Trump’s support among women is dismally low — this is a thug who thinks women need to be punished for getting an abortion — and yet Komen doesn’t think this is enough of a problem that they should distance themselves from him.

I’ll never donate to the Susan G. Komen Foundation, and I don’t see how they can stop their slide into irrelevance at this rate. I’m just waiting for the Republicans to slap a coat of pink paint on their logo to show that they are pro-woman. It’s the least they could do.