I have friends and family in the Seattle area, so I’ve been following the news about the impending doom-storm that was supposed to strike the Pacific Northwest with some interest. There was a little worry, but mainly I figured it would give my mom something exciting to talk about on the phone. At least I heard about all the pre-storm rush to stock up on candles and flashlight batteries and food, and how Fred Meyer shelves were getting cleaned out; I told them it wasn’t anything to worry about until they were selling out of big sheets of plywood.

And then it just fizzled out. I hear that all you Seattleites got was some gusty blustery rainfall, and then it was over.

How can weather forecasting fail so badly? Here’s a helpful summary of how the models got tricked. Weather is still pretty darned complicated.

It also includes my favorite meme for the non-event. 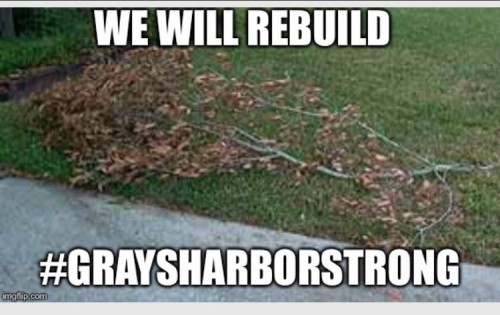 Of course, it could have been much, much worse — the consequences are far more dire if a major storm materializes that was not predicted. Read this account of the Armistice Day Blizzard of 1940 to get some perspective — hundreds of people died because back then, they didn’t have the tools to predict the weather as well as we do today, so people went cheerfully off to hunt ducks and walked and boated their way right into catastrophe.

There was a time, too, when there were no weather satellites, no telemetry to provide data that could be plugged into sophisticated formulas and fed into supercomputers for timely forecasts. Indeed, that the weather could be predicted with any degree of accuracy then — November, 1940, to be precise — seems almost miraculous, meteorology in those days being one part science and two parts the divination of omens, signs, and portents.

I think a few false alarms are an OK price to pay.