We Americans like to think we’ve got the greatest everything, including the greatest science denialists. Who can forget Sarah Palin’s rage against mere fruit fly research? And now we’ve got Donald Trump, irate about his hair spray.

Over the past few months, we’ve seen Donald Trump lower, again and again, the bar for political discourse. All the while, though, he’s been lowering the scientific bar, too. In May, for instance, while speaking to an audience of West Virginia coal miners, Trump complained that regulations designed to protect the ozone layer had compromised the quality of his hair spray. Those regulations, he continued, were misguided, because hair spray is used mainly indoors, and so can have no effect on the atmosphere outside. No wonder Hillary Clinton felt the need to include, in her nomination speech, the phrase “I believe in science.”

And it’s not just hairspray: there is a legion of scientific issues on which Trump is ignorant and wrong.

Just to be fair, though, I’ll remind everyone that Democrats have sometimes gone down this road: I remember Proxmire and his Golden Fleece award, in which he railed against science he didn’t understand, and then there’s Tom Harkin, throwing away money on quackery.

But now Australia is getting in on the game, in a very Proxmirish move. 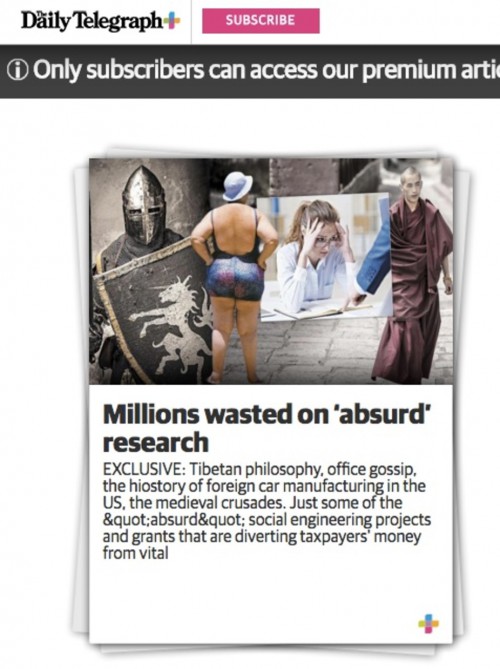 Oh, yeah, how dare they study philosophy, history, psychology, or sociology. We must ridicule what we don’t understand.

Sydney’s Daily Telegraph is suffering one of their frequent relapses into frothy-mouthed panic about government wastage on research grants. Poking at layabout academics for ‘wasting’ tax dollars on seemingly frivolous projects reminds me of nothing more than the schoolyard bully who secretly knows he peaked in year 9. Today, the Tele flattered me by holding up one of my own projects for ridicule, ironically illustrating their point that rusted-on ideology, and patronage provide the most direct route possible to mediocrity.

Don’t academics understand that the only thing we’re supposed to do is cure cancer? It’s a zero-sum game, and every study of medieval history or Renaissance art or the psychology of gender or goddamn fruit flies means another metastasizing tumor and horrible slow death.

So the solution is to demand that the Australian Research Council present grant proposals for review to the beery patrons of local pubs. Yeah, that’ll steer research funds appropriately.

Ray Hadley picked up the Telegraph’s baton in an interview with the Treasurer, Scott Morrison, demanding that the ARC justify its funding decision in the front bar of a Western Sydney or North Brisbane pub.

Yes, after the forlorn cries for better funding of research rang through Science Week last week, and as the ARC sits in Canberra to decide the outcomes of this year’s biggest schemes, the pro-ignorance side of the culture wars has decided to play their favourite game. Their attempts to paint researchers as out-of-touch layabouts draining the public purse are, if you read the comments on Blair’s blog, playing well with the patrons of those very pubs.

Uh-oh. Nobody tell Trump about this idea to put bars in charge of NIH/NSF/NASA. He’d probably think it was a terrific plan. So would his fanatical followers.