By now, probably everyone has read that strange moan of anxiety about social media titled “I’m a serious academic, not a professional Instagrammer” — or at least, if you’re an academic who enjoys a good eye-roll over someone with a massive 2×4 rammed up his butt, you’ve read it. It’s the one where an anonymous young Ph.D. student whines about people on Twitter or taking selfies or using instagram or writing blogs…in an anonymous blog post. They make a lot of silly complaints about people using hashtags at conferences and how the powers-that-be keep telling them how important their social media presence is to their career (which is really weird: my experience has been that administrators dread the fact that professors are speaking publicly about their experiences at their institution, and would love to be able to bottle that genie back up). There has been a flood of rebuttals to the fundamental wrongness of the “serious academic”, and I’ll just mention The Tattooed Professor, Meny Snoweballes, and Dean Burnett as good examples.

I want to take a different tack. I feel for this person.

It’s a really tough time to be a starting academic — it’s always a tough time. We get so many demands. Publish. Publish lots. Write grants. Write many grants, because almost all of them will be rejected. Teach. Every course is a challenge, and some of us have to teach multiple courses per term. Serve on committees. Attend meetings. Review papers. Dance, monkey, dance, or you’ll never get an academic job (you probably won’t anyway), you’ll never get tenure, you’ll never get promoted.

And then all those voluble assholes on the internet are adding pressure to tweet or write blogs or get out of the lab and talk to the public? Oh, hell no. Let me just fill up my lab notebook with numbers and gel photos and data, and pay me to do that. I’m running as fast as I can to just keep up without throwing these damned social obligations on my back.

I sympathize. Really, I do. There are lots of things I don’t like about my job (die, committee meetings, die), but I’m obligated to do them, so I do them. No matter what your job, there are always inevitable requirements to occasionally shovel out the stables. Academia in particular is rife with an excess of expectations, and everyone knows it.

But the first thing I have to point out is that social media isn’t one of them. You won’t get tenure for your Twitter activity, and in fact there is an academic bias against outreach and social activity and public engagement. “Serious academic’s” bleat is less an act of rebellion than a performative act of solidarity with staid traditional academics. It’s a person looking in terror at the chaos and uncertainty ahead of them in academia, and picking what they think is the side of the establishment…and they aren’t even certain that that is the right side to pick, witness the fact that their essay is anonymous.

But the most important thing I have to say is that they’re doing it wrong. They’re focusing on the obstacles and forgetting about the purpose. Nobody goes into academia for a love of grant writing and committee meetings. We don’t even go into it over the thrilling prospect of tweeting to a conference hashtag.

We go into it for the joy of the discipline. Remember that?

Personally, I signed on to this life because of some great experiences in science. I was lucky and was employed in a lot of extracurricular science stuff through college, and it was that that was more influential than my classes, I’m sad to say. I was doing animal care and assisting in animal surgeries in the department of physiology and biophysics — lowering electrodes into a living brain was enthralling. I worked with Johnny Palka on fly pupae, watching nerves grow into the developing wing. I did mouse brain histology in the psychology department with Geoff Clarke. I was Golgi staining fetal tissue with Jenny Lund and counting dendritic spines. These were the events that convinced me that I wanted to do more.

I went off to graduate school with Chuck Kimmel and discovered zebrafish embryos. Do you people even know how beautiful an embryo is? Exploring how cells behave in the complex environment of the organism is what kept me going. 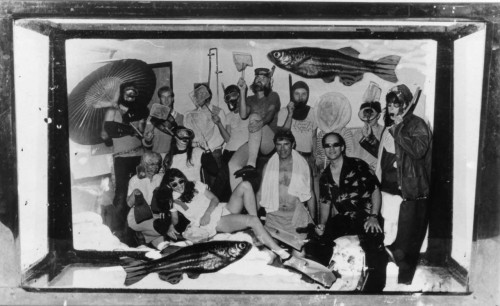 I did a post-doc with Mike Bastiani and saw that grasshopper embryos are just as beautiful.

Then my first job at Temple University, where I had teaching obligations for the first time, showed me that I really enjoyed teaching. So I’ve followed that star, too. It all works. At every step, pursue the joy, while never forgetting to also do the duties. Some people don’t enjoy the teaching, so they focus more on the research. Some people, believe it or not, have a talent for management, so they move into administration, or into running large labs.

And some people write books. Or make videos. Or compose music or poetry about esoteric subjects. Or write blogs. It’s all good. You don’t have to do it all. You just have to always keep your attention focused on what brings you to your bliss.

Don’t let other people tell you what you must do with your life, and avoid the temptation to lecture others on what is the one, true, proper way to be an academic. If you find deep satisfaction in grinding out data, do it. If you enjoy teaching, do it. If you enjoy communicating to the public about that weird stuff you’re doing, do it.

I feel sad for “Serious Academic”. So young, and so certain of the one true path for all. He reminds me of someone.

“You are fettered,” said Scrooge, trembling. “Tell me why?”

Try being the “Joyful Academic” for a while. It can be hard, especially in the current climate, but if nothing else, being true to yourself is more rewarding than trying to be true to someone else’s ideal.

Minnesotans! You have an election on Tuesday! Vote! » « Any story of Kent Hovind needs more Nazi imagery