In 2001, a French anthropologist discovered some very interesting specimens in West Central Africa: the skulls of some 6-7 million year old apes that showed some chimpanzee-like features and some human-like features. He called it Sahelanthropus tchadensis.

In 2002, Mike Pence used the bully pulpit of the house of representatives to denounce Sahelanthropus and the entire theory of evolution, in a pointless exercise of flouting his ignorance. Why, I don’t know; perhaps he thought he could use a scientific discovery to somehow legislate against science? The performance has been caught on video.

It’s an extended riff on the “just a theory” argument, revealing that he doesn’t understand what a scientific theory means. He cites the 1925 Scope trial as the moment where this mere “theory” was legislated into the classroom and taught as fact; wrong. The Scopes trial was the result of a law that tried to prohibit teaching evolution, the side of science lost the case, and the theory has been taught in classrooms ever since because it is the best-supported explanation of the history of life. And evolution is a fact — life has not been static, but species change over time.

Then he claims that we all remember our classrooms illustrated with that linear portrayal of humans evolving from little monkeys to Mel Gibson. Well, I’ve been teaching for 30 years that that linear sequence is wrong, and that evolution is all about branching descent, which is also, as it happens, how Darwin thought about it (that popular Time-Life illustration is a true curse on evolution education). 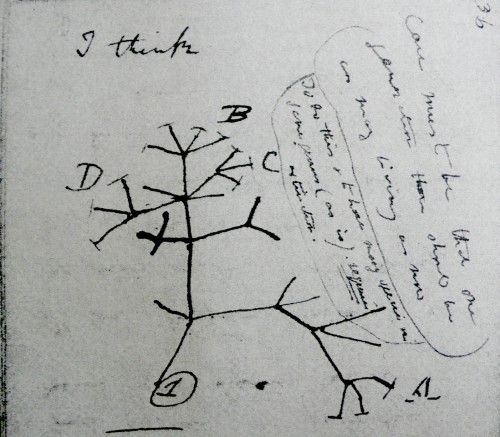 But I also challenge Pence on his claim that this portrayal was ubiquitous in classrooms. I had a public school education, in the liberal stronghold of King County, Washington, and never once heard the word “evolution” pass the lips of my teachers. What I learned about evolution before college I got from sneaking into the “Adult” section of the local public library, because this was a subject they didn’t even allow children to read about.

Pence reads about Sahelanthropus and claims to be surprised, that this represents a new theory that human evolution was taking place all across Africa and on the Earth. Uh, what? He also criticizes it because the textbooks will have to be changed, because the old theory of evolution…is suddenly replaced by a new theory.

I really want to play poker with Mike Pence. The astonishment on his face when the second hand dealt to him is different from the first will be something to behold. He will be aghast that the rules of poker get changed with every deal.

And then he gets to his point. Every theory is equivalent. We ought to also teach the theory that the signers of the declaration of independence believed — that humans were created by a creator. The Bible tells us that God created man in his own image, male and female he created them, and I believe that. He also thinks that scientists will come to see that only the theory of intelligent design provides even a remotely rational explanation for the known universe. Alas, scientists have scrutinized intelligent design explanations for a century or two now, and have generally found them to be useless crap.

It’s clear. Mike Pence is not only a babbling loon, but he’s a generic Biblical creationist who sees Intelligent Design creationism as a loophole to smuggle his religious ideas into the classroom. He’s wrong about virtually everything in that pompous little speech.

He’s lucky in one thing, though: he’s got Donald Trump boldly distracting most of the media from making any noise about Mike Pence’s incompetence and ignorance. Even without Trump, I don’t want this goober anywhere near high office.