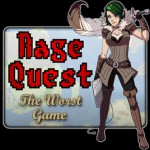 Only by marriage, though, and he’s a gamer-in-snark, so that might make it tolerable. My son-in-law, Kyle Hughart, is trying to get a parody rpg, Ragequest: the Worst Game, greenlit on Steam.

“You know I can’t stay,” he said softly. “And you can’t go. The house wouldn’t be the same without you.” She didn’t speak. She couldn’t find the words to respond. She just watched his figure grow smaller, and smaller until it was gone. That’s how I would end a romance novel about a congresswoman and a snowman if I were to write one, but I didn’t. Instead I made Rage Quest: The Worst Game! A snarky, low-def odyssey through the trials and frustrations that unite gamers everywhere.

You’ll play as Ivy, a daring and cynical adventurer, as you spend 3-4 hours traversing a modestly-sized world of cheeky dialogue, terrible puns, and lovingly crafted artisanal frustration. Will your skills and irrational dedication to finish what you’ve started triumph over the forces of bad camera tracking, long cut scenes and useless allies? What other perils might lie in store for your delicate temper and extra-throwable wireless controller!? Find out for yourself as you explore the game already being called “Game-changing,” “Extraordinary,” and “Graphically extant” by a sentence you’ve read! Rage Quest! Mean-gift it to your enemies!

I worry that my daughter will starve. If you have a Steam account, vote for this game so my son-in-law can buy a package of ramen. Or maybe two.

I took a break from grading for this? » « Mary’s Monday Metazoan: Aliens among us