What moment? Fertilization is a complex process, with a series of steps.

This is all routine and relatively well understood stuff. I’ve seen it in fish and frogs and sea urchins, it’s relatively easy to visualize. “Easy” meaning that it can be done with readily available reagents and gear: I’ve done it myself with calcium-sensitive dyes (not cheap), a fluorescence microscope (not at all cheap), a filter wheel for multi-wavelength visualization (another additional cost), an intensified digital camera (we’re still talking thousands of bucks), and special software (which in my case was cheap, because I wrote it myself). But still, lots of labs have the equipment necessary for it, so it’s not that unusual.

It may also be useful. As it turns out, healthy eggs have a strong depolarization response to sperm entry, which some researchers are suggesting could be helpful in assessing zygote health in in vitro fertilization. They’re visualizing the reaction with fluorescent molecules that respond to the release of zinc from the egg, and seeing that there’s variability in the strength of the response, and that it may be correlated with embryo viability.

Unfortunately, the media doesn’t get it. Bright flash of light marks incredible moment life begins when sperm meets egg, announces the Telegraph. Wrong in multiple ways. No, there is no bright flash of light. There is a chemical reaction at fertilization that can be visualized with chemical reagents and some fancy optical equipment in vitro — ova do not radiate photons and none of that stuff was present in the fallopian tubes of most women at the moment of fertilization.

Also, that is not the “moment life begins”. The sperm is alive. The egg is alive. What’s being seen is part of the process of forming a block to polyspermy, and it occurs before the actual fusion of two haploid nuclei.

But if the Telegraph is bad, wait until Ray Comfort gets hold of this observation. And his followers start gushing over it. 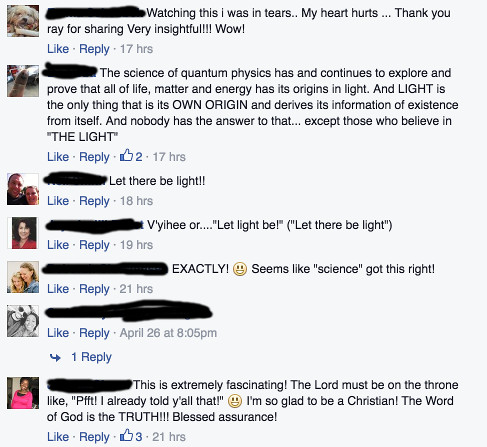 There’s so much nonsense there. Wow! Jesus said He was the Light of the world…this proves it! No, it doesn’t. No wonder we love fireworks so much. They happened when we began our lives!!! There were no fireworks at fertilization, unless you happened to be bathed in a specific fluorescent compound and had extremely sensitive eyes as a zygote. this proves life is at conception so its a baby no more early abortions. Life is the release of tiny amounts of zinc? And my favorite:

Unfortunately, the anti-God evolutionists will try to explain this away as simply a “natural” chemical reaction as the sperm and egg make contact. Scales will form over their eyes like Saul’s.

But it is! You can’t simultaneously declare that science ‘proves’ life begins at conception and dismiss the phenomena that science is describing!

Also, no one seems to be catching on to the core intent of the research. It’s looking at ways to evaluate embryos produced by in vitro fertilization and decide which ones are worthy of implantation, and which should be discarded. It’s also making it obvious that a large proportion of fertilized eggs are not particularly viable, and that fertilization is not a magic process bestowing insta-humanity. If that’s God’s finger touching the eggs, God is killing a lot of embryos.

Congratulations to the Bell Museum » « Do vaccines work?