This is a Minke Whale, in life. 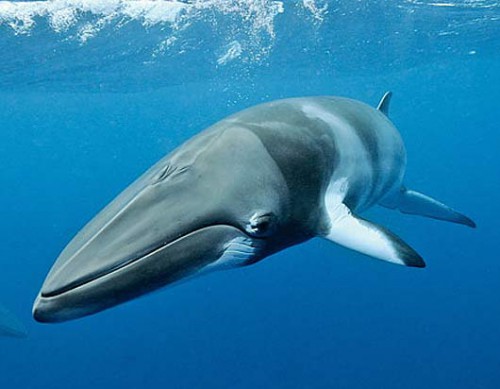 Unfortunately, it’s going to be a little harder to see them in life. The Japanese whaling fleet has just returned to base with a lot of carcasses that will be destined for cans and pet food.

Japan’s whaling fleet has returned to base with the carcasses of 333 minke whales, in apparent violation of a ruling by the International Court of Justice.

Reuters quoted a statement by Japan’s Fisheries Agency that said 103 male and 230 female whales were caught during the fleet’s summer expedition to Antarctic waters. Ninety percent of the mature females were pregnant.

Did you know that Japanese whaling was banned by the International Whaling Commission, with one little loophole left for scientific research? They’ve been abusing that loophole for years.

The court said the research program had generated only two peer-reviewed papers that together refer to nine whales.

‘In light of the fact that [Japan’s program] has been going on since 2005 and has involved the killing of about 3,600 minke whales, the scientific output to date appears limited,’ the court wrote in its judgment.

By a 12-4 vote, the court based in The Hague decided Japan must ‘revoke any extant authorization, permit or license granted in relation to’ its whaling program, ‘and refrain from granting any further permits’ related to it.

Speaking of bad science, never trust the American College of Pediatricians » « You had me at your contempt for mowing lawns