It’s easy to find lists of dumb things creationists say, and I’m familiar with that lot, but here’s a fun new time-waster: Things Anti-Vaxxers Say. Here’s a beautiful example of something I’ve rarely seen so clearly stated: they get the facts totally wrong, actually the reverse of the actual situation, but nope, that doesn’t stop them from inventing a bogus rationalization around them. 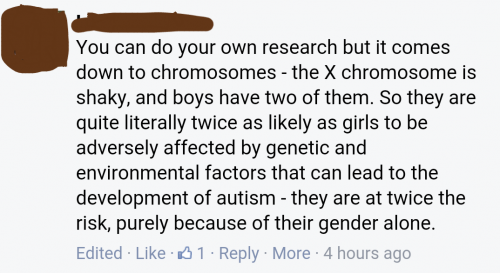 You can do your own research but it comes down to chromosomes — the X chromosome is shaky, and boys have two of them. So they are quite literally twice as likely as girls to be adversely affected by genetic and environmental factors that can lead to the development of autism — they are at twice the risk, purely because of their gender alone.

Uh-oh. I have 22 other chromosomes besides my sex chromosomes (I’ve actually seen them!), and…they’re all in pairs. I’m doomed.

But wait! I only have one X chromosome! I’m saved by the reduction in its pernicious influence!