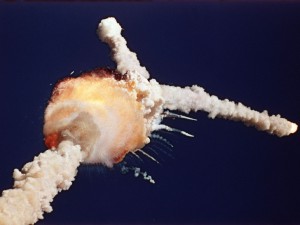 On this day in 1986, the space shuttle blew up shortly after launch.

I was a graduate student in Oregon. I remember it vividly: starting a normal day in the lab with NPR on the radio, as we would, and the news came on. We spent most of the morning staring out the window, listening to the reports coming in, and didn’t get much work done that day.

Now that’s info-tainment » « And then there were four