There has been a bit of silence here because my mad wife decided she wanted to go camping. In Minnesota. In the middle of January. I know winter camping is a thing, it’s just not my thing, but I went along. So we headed off to Glacier Lakes State Park yesterday, where she’d reserved a snug little cabin for the evening.

Strangely, the DNR link above advertises the place with lots of pictures of beautiful meadows and sparkling lakes and groves of wild flowers. For some reason, they don’t tell you what it’s like in January. It’s like this. 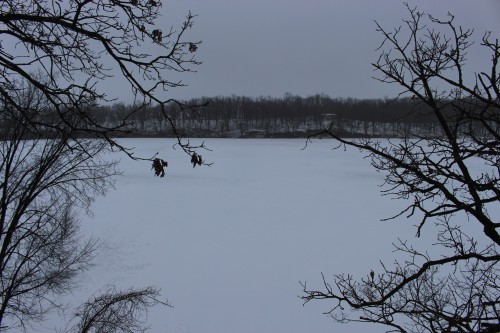 Skies like spilled milk. The lakes are sheets of ice, covered with snow. The trees are barren and skeletal. Which isn’t unlovely, in its own way, but it’s not how I picture camping (which is more gray, with constant drizzling rain, and bears.)

It wasn’t bad. We settled in, we later went to bed, and we turned off the lights, and discovered something else about the experience.

Total darkness and silence. We were far from anywhere, there were no other campers, the heavy cloud cover meant the moon and stars weren’t shining through at all. I held my hand up to my face, and saw nothing. I waited an hour, for my eyes to adjust…still nothing. There was no wind, and no animals were crazy enough to be out and about, so there was no sound, either. So this is what a sensory deprivation tank might be like.

It turns out I do not cope well with sensory deprivation. I was lying there awake all night, my brain churning away trying to find something outside itself to latch on to, and refusing to go to sleep until it heard a little noise or got a faint glimmering of something. I don’t know whether it was claustrophobia or agoraphobia, but something about being swaddled in dark emptiness was unsettling.

So next time my wife demands that I share her madness, I’m bringing a metronome and a night light. I’m kind of wrecked for the day now, too, and am suddenly noticing more acutely the tick of the clock here at home, the occasional distant swish of a car driving through the snow, and all the clutter in our house.

Hey, you know who else is camping in a cold remote wilderness? » « I really need to get a copy of Ken Ham’s Bible