In his little weekly radio homily, Ken Ham makes an amazing claim about the Bible. After pointing out that scientists have had different interpretations of Neandertal’s relationship to modern humans, he claims that the Bible has all the answers.

They wouldn’t be surprised if they started with God’s word. You see, when we start with the Bible and not Man’s ideas about the past, we get a very different view of Neandertals. They were human. And we know that Neandertals were intelligent descendants of Adam and Eve, just like us.

He has a Bible that contains a phylogeny of Neandertals? Remarkable.

Actually, the basis of his claim is that Neandertals are the remains of people who died in the flood; that they were not on Noah’s ark, but all “kinds” were on the big boat; therefore they had to belong to a “kind” already represented on the Ark, which means they had to be human. So he really doesn’t have any information from the Bible that supports his claim that they’re humans, but only a flawed chain of inference. We’d have to argue that Australopithecines were also fully human, because they also all died in the Flood, according to Ham’s own claim of perfect representation of all “kinds” on the boat, and therefore Adam and Eve were the ancestors of Lucy, as well.

It’s rather illogical, too. The reason he says the Bible explains Neandertals is that the Bible says absolutely nothing about Neandertals, so he has complete freedom to claim that whatever parts of science he likes are already inferrable from the tea leaves. The Bible also says nothing about other hominins; about tomatoes; about genes; about the circulation of blood in the human body; about the planet Neptune; about signal transduction in cells. The absence of an explanation is being treated as an explanation-shaped hole he can fill with whatever he wants.

Meanwhile, biblical cosmology treats the Earth as a disc of terra firma floating in a vast universe filled with water. 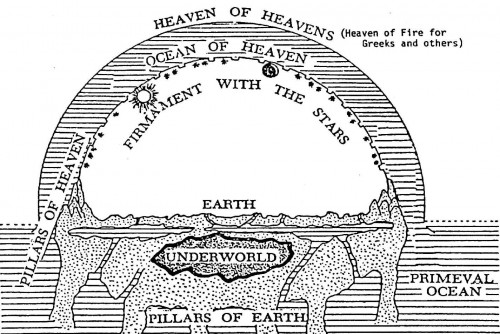 Away in the darkness » « Comrade Rodent, hero