It’s really just an excuse for conservatives to claim persecution where none exists. Like this Texas restaurant that proudly displays this sign. 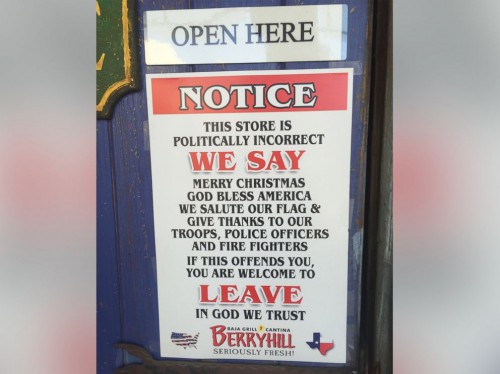 Notice: This store is politically incorrect. We say ‘Merry Christmas,’ ‘God bless America.’ We salute our flag and give thanks to our troops, police officers and firefighters. If this offends you, you are welcome to leave. In God we trust.

A couple of things annoy me here. One is that no, he is not being politically incorrect. He’s being stupid.

“Politically incorrect” would mean burning an American flag on the sidewalk in front of his restaurant. Would that be OK?

“Politically incorrect” would mean demanding a reduction in military spending.

“Politically incorrect” would mean defying the racist behavior of the police.

“Politically incorrect” would mean pointing out that our troops have killed many innocent civilians.

What he has written is not politically incorrect: it’s blatant pandering to a rabidly conservative customer base that he says himself in the accompanying video has made few complaints. There’s nothing courageous about supporting a majority view.

The Christmas crap is utter nonsense. No one has been getting horribly offended at being wished a “Merry Christmas” (well, except maybe Tom Flynn). It’s a trumped-up problem created by right-wing nut jobs as propaganda.

So mission accomplished, religious conservatives. You’ve successfully politicized a benign holiday greeting that secular humanists and atheists and Jews and Muslims and Zoroastrians used to happily exchange without a second thought. You got your war on Christmas. Now have a happy damn holiday.

Here’s how I keep my head warm this season as I go on my morning walk. 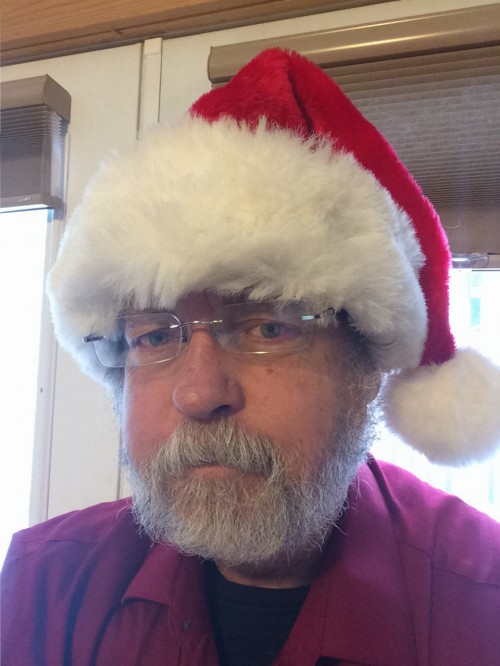 God-hating atheist wearing a Christmas hat, just like our Lord and Savior Jesus Christ would have worn.

Liberals and atheists, as a rule, don’t hate Christmas — we like parties and vacations and good food, too. We indulge in this holiday even more than Puritans and prudes and indignant conservatives. If they really want to go after the people who have despoiled the religious purity of their sacred day, they should go after the capitalists and greedy jerks who see it as an opportunity to exploit a gullible public.

That would be really politically incorrect.

Just cancel Christmas now. » « Where in the world is…?