The man who murdered people in a Planned Parenthood clinic was a “gentle itinerant loner”, accorded to the New York Times. He went to church, read the Bible cover to cover, and had an assortment of guns, so I guess he couldn’t have been that bad. He just wanted to be left alone. 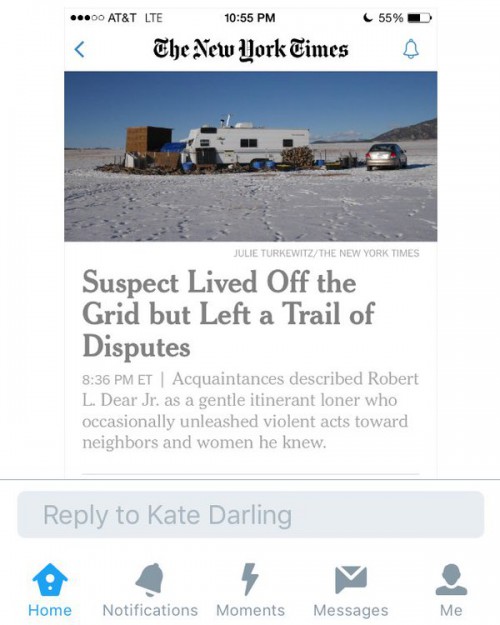 At least they don’t say he’s crazy, the usual go-to excuse when a white man goes on a misogynistic murder spree. Progress! But they still don’t take that necessary next step of noting that someone who tries to intimidate people with violence is, of course, a terrorist. Terrorism is only a word to be deployed against Muslims, it seems.

But still, you can read between the lines. You know how after a psychopath is caught, there’s usually a litany of interviews with former neighbors saying how he was such a perfectly normal, ordinary guy? Not with Robert L. Dear.

Mr. Davis said he was unsurprised to see Mr. Dear, whom he described as “a pretty poorly adjusted guy,” emerge as the suspect in the Colorado shooting.

“I think I would have thought he was a guy who would go on a rampage,” he said. “We were very wary.”

The most chilling line to me was just a few words from Dear:

On Cannabis.com, the writer said in December 2005: “AIDS, hurricanes, we are in the end times. Accept the LORD JESUS while you can.”

Have you ever noticed that while Americans will freak out over Muslims praying on an airplane, we think nothing of the huge army of death-cultists in our midst, people who are certain the world is going to end soon (and welcome its destruction!) and who want to steer our representatives and policy towards Armageddon? No big deal. A bunch of smiling used car salesmen live among us, own whole television networks, serve in congress, and they grin and assure us that our death is imminent and well-deserved, and we shrug and ignore them until one snaps and opens fire with his constitutionally protected semi-automatic rifle.

It’s so reassuring to know that the New York Times will report our demise in its blandly neutral tone, as long as the shooter is good white Christian.