Holy crap. Take a look at this monstrosity that was shown in a congressional committee by Republican Rep. Jason Chaffetz to show the need to defund Planned Parenthood. It’s appalling. In my universe, there would be guards with meathooks who would have dragged Chaffetz out of the room, he would be cashiered out of office, and all of his votes would be retroactively nullified. 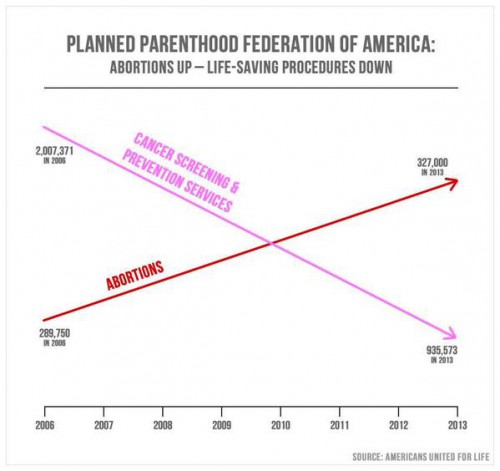 I am simply flabbergasted. If a student tried to pass that off to me, I’d fail them forever. That isn’t just dishonest, it is intentionally and proudly dishonest. It comes from Americans United for Life, and they are bragging about its use in congress.

Fuck me. No. Watch this smug asshole in action.

He’s going to check his sources and get to the bottom of it, right. If Chaffetz had any intelligence at all, he’d have looked at the graph and seen immediately that it was rank bullshit.

Those anti-abortionists really are among the most dishonest people I’ve ever met.

St Cecile » « I approve of this message