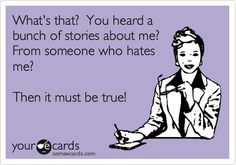 There’s a reason I’ve lost all respect for Hemant Mehta: wearing smug sanctimony while pandering to MRAs, slymepitters, and notorious harassers is not a good look. He’s now insisting that Phil Plait, Rebecca Watson, and I owe Tim Hunt an apology, on the basis of a poorly written bit of hackery, inspired by that blinkered obsessive, Louise Mensch, in a far right wing rag. It’s the latest bit of revisionist history, and it’s published in Commentary magazine, alongside articles whining about Obamacare, the Iran deal, and students opposing campus rape culture, overseen by editor John Podhoretz. I suppose it’s possible that he didn’t notice the stench of the company it’s keeping, but he might at least have thrown a red flag at the title: The Timothy Hunt Witch Hunt.

I’ve noticed that people who fling around accusations of witch hunting tend not to be at all aware of nuance and complexity. And when they also complain about a white guy losing an honorary position as “lynching”, it’s safe to say you’re reading garbage. It’s also ironic when they accuse others of some kind of Manichean view that demonizes said poor white guy.

It’s a terrible article that excises inconvenient facts from the narrative. Never mind that Hunt said dismissive things about women scientists at a luncheon; never mind that he himself confirmed that he actually said them, and that he honestly meant them. Now we’re supposed to simultaneously pretend that his words were maliciously misstated, and that he was just joking.

And further, now everybody who reported and deplored his comments is guilty of conspiring to destroy a good man’s career…further, that he has been a lifelong champion fighting for women’s progress in science, and now we have actively hampered women’s rights. To back that up, Mehta links to a post I wrote as an example of our wretched efforts to destroy Hunt.

I guess he doesn’t expect anyone to follow that link, because it’s a post in which I openly state that Hunt isn’t an evil guy, but just oblivious. I said:

Here’s what it all means. It does not mean that Hunt is a terrible scientist (I know his work, it’s important stuff), it does not mean that he has to give his Nobel back or get fired from his real positions. It means that Tim Hunt has not thought very deeply about inequities in science. He questions whether it’s even important. Even after all this criticism, he’s baffled that anyone would find his opinions objectionable, and he’s still not questioning his own privilege.

I also backed it up with a quote from Hunt from 2014, well before this affair, in which he was similarly clueless about the underrepresentation of women in science was “actually a bad thing,” the point being that a well-off white man with a Nobel and multiple honorary positions is pretty much the definition of privilege, and it’s completely unsurprising that he would fumble an attempt to talk to science journalists about discrimination in science. He might mean well, but he has no appreciation of the many levels of sexism that women have to face.

So no, I’m not going to apologize — I don’t even have any regrets at all — for highlighting a massive pratfall by a major name in science. I am particularly not going to be persuaded by a couple of hacks trying to claim that a) he didn’t trip up, and b) he meant to do it for a laugh, anyway. I’m only going to roll my eyes at the affronted claim that I was out to destroy his career (or that we succeeded in destroying him), and that I and all the other critics painted some kind of false portrait of the man as an evil monster with no redeeming characters who hated women, since that didn’t happen, either. I recommend instead that everyone read this article by Thomas Levinson, which points out the real problem: not evil intent, but casual ignorance.

As for Mehta…I’ll suggest that he look at the commenters he caters to with that article. It’s a who’s who of the slymepit and various deranged characters who’ve spent the last few years losing their minds to rage about those damned women who are ruining atheism and skepticism. That’s his audience now.