Then how could he write down such illogical inanity as this? 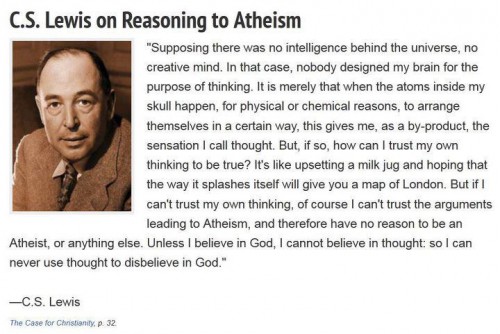 Let’s break it in two, shall we? Start with his premise.

Supposing there was no intelligence behind the universe, no creative mind. In that case, nobody designed my brain for the purpose of thinking. It is merely that when the atoms inside my skull happen, for physical or chemical reasons, to arrange themselves in a certain way, this gives me, as a by-product, the sensation I call thought.

See, there’s his problem. Brains didn’t just happen. They aren’t merely some peculiar arrangement of atoms. They have a long contingent history in which they were shaped by selection to have particular properties that allowed bearers of slightly more functional nervous systems to outlive, outbreed bearers of cruder brains. An absence of a designer does not imply that the only other alternative is random chaos.

After that faceplant, it only gets dumber.

But, if so, how can I trust my own thinking to be true? It’s like upsetting a milk jug and hoping that the way it splashes itself will give you a map of London. But if I can’t trust my own thinking, of course I can’t trust the arguments leading to Atheism, and therefore have no reason to be an Atheist, or anything else. Unless I believe in God, I cannot believe in thought: so I can never use thought to disbelieve in God.

First, you can’t trust your thinking to be true. You have to test and verify all the time. You can believe in thought without believing in gods: we all build empirical models of how the world works and test them constantly. From an early age, we noticed that when we dropped things they fell to the ground; when we learned to walk we stumbled and learned that we can fall to the ground, and it hurts; we learned that when we fell off the table it hurt a lot more than when we fell while standing on the ground. And now, when I look out my second floor window, I know jumping out of it would probably do me significant damage, despite never having actually tried it.

Most of what we believe isn’t derived from the pure and perfect reasoning power of our flawless brains — it’s learned by trial and error by brains that are often afflicted with stubbornly bad ideas.