Several members of my family back home attended the Bernie Sanders rally in Seattle, and my niece took a few pictures. 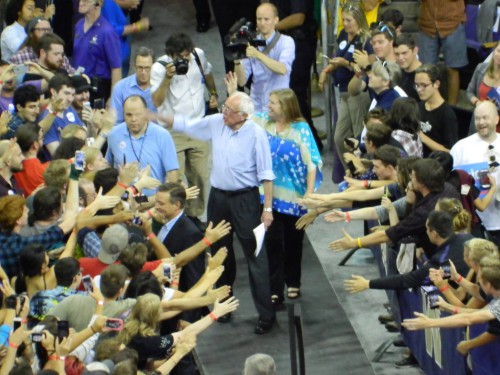 I have also been chastised for saying I’d be willing to vote for Hillary Clinton in the election. I find myself in the strange position of being the conservative member of my family. I’m almost afraid to go back to visit next week: have I become the cranky old right-wing uncle who makes a nuisance of himself once a year at family reunions?

Only in comparison, maybe. I’d like to be able to vote for Sanders in the election, but my main concern is keeping those lunatics in the Republican party out of office, so yeah, in the final analysis, I’ll hold my nose and vote for the most likely Democratic candidate in the running.

By the way, on the story about the Black Lives Matter organization shutting down a Sanders rally: good for them. That is exactly what activists need to do to bring focus to issues that are important, and I’m happy to see candidates learning (at least, I hope Sanders is learning — if he isn’t, well then, he isn’t as good a candidate as I’d hoped). Next, let’s see Clinton make race and discrimination an important part of her campaign.

One other thing: the Black Lives Matter group tried to highlight the racist history of Seattle, which is currently a hot topic in the area — there’s a lot of discussion about zoning and racial exclusion. For all the protests that nobody intended to force black people to live in particular areas, growing up near there we all knew that there was effectively a racial structure to the city. Almost all the black folks lived the central district. There was relatively little integration. The suburbs were even worse.

Nevertheless, Durning insisted, “the whole process of dividing the city was strongly colored by the existing racial divisions, covenants, redlining, zoning – that was all intermingled together.” When I again pressed the question of what came from what, he said, more broadly, that “it was soil that the plant grew out of – our zoning grew out of a climate of race and class exclusion.”

The University of Washington has an informative page on racism in Seattle. And don’t even get me started on how people of Japanese ancestry were treated: read David Neiwert’s Strawberry Days: How Internment Destroyed a Japanese American Community

to see what that’s all about.

I do love Seattle, and Bernie Sanders, but the first step to making them even better is recognizing the real problems and fixing them.

Ugh » « How to make a summer movie I would like