You can bomb your hometown too! Just put your location into that link, and it’ll show you the area of devastation if your town were hit by the Hiroshima bomb. Here’s the effect if the nuke went off at my house: 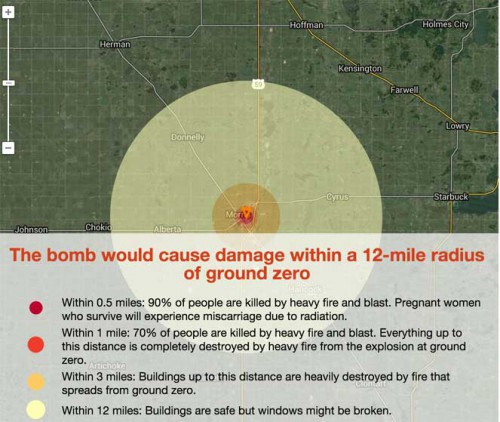 I was a bit disappointed, actually. All that happens to Cyrus is broken windows? The area of firestorms and gross destruction is totally within the bounds of where I routinely walk every day. It somehow seems so much smaller than I imagined.

Then I read the story of this photo, which was taken a few minutes after the detonation, 6 miles away. 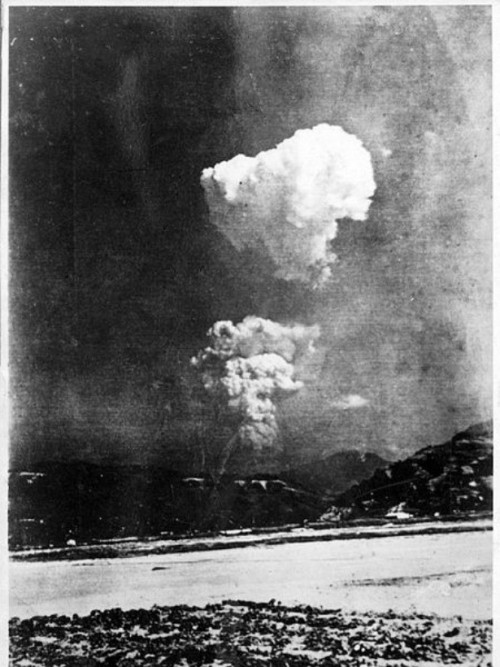 Yet even given the delay between the flash of light, the sound, and the explosion, Siemes and his colleagues went to the front of the house to see where the bomb landed. All of the survivors he later encountered had the same impression “that the bomb had burst in their immediate vicinity.” The fact that one massive bomb, kilometers away, could cause this sort of force and devastation defied belief.

“Everybody is running around saying, ‘Oh, it’s weird, my house randomly got hit by a bomb,’” Wellerstein describes it. “When the answer is, no, no, no—you guys are actually fairly far away from the bomb and it was only one bomb. It was huge.”

“I’ve always thought that that was a powerful illustration of how long it takes your brain to wrap around something that is just so unfamiliar,” he continued.

The person who took this photo would have been among the first to look out there and realize that this wasn’t just your run-of-the-mill bomb. It wasn’t the air raid that the citizens of Hiroshima had been anticipating for months. This was the beginning of a new world, one with a bomb unlike anything anyone had ever experienced before, something so new and fearsome that at first no one could understand what it was.

And then it begins to sink in that that little orange circle on the map represents unimaginable horror.

At least one person will enjoy the Republican debate tonight » « A real chemistry set?