The answer is, apparently, one. Some guy tried to organize a ‘heterosexual pride’ parade in Seattle, and only the organizer showed up. With some balloons and a cardboard sign. 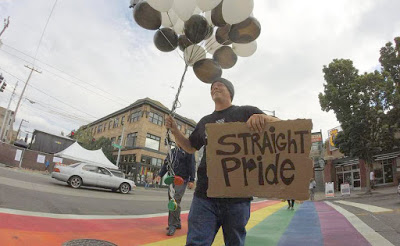 This reflects poorly on us, and I think we need to vote Anthony Rebello out of the Straight Men’s Club. All in favor (only straight men allowed to vote — we know all teh gayz want to snap him up for their club), raise your hand and say “AYE”.