There are these maps of the popularity of certain cuss words in the US — I, of course, browsed through them looking for my county to see what word is representative of our preferred profanity. There are all these words that I’d blush to say in front of my mother, and nope, Stevens County is on the low end for all of them. There’s only one where we stand out. 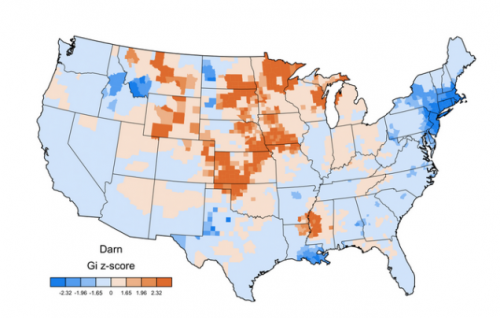 My county is easy to spot. Notice that the western edge of Minnesota is mostly straight north and south, except in roughly the middle, where there’s a little wart protruding into South Dakota? Go a little bit directly east of that, and there’s this perfectly square county colored a dark orange in this map. That’s us. (If you need a labeled county map, here’s one.)

Our big dirty swear word around these parts? It’s “Darn”.

I am totally unsurprised.

Friday Cephalopod: Emergence » « There are good reasons I’ve never been a fan of Reddit