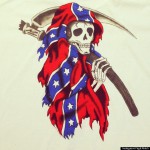 I’m in transit with spotty internet access, but clearly we need a thread to discuss the horrific race crime in Charleston. I’m dismayed that not only was this an act of premeditated, racially motivated murder, but the media is slow to even consider that the white perpetrator was a terrorist and a racist (would you believe I’ve even seen the excuse that he had ‘black friends on facebook’?)

I’m going to go further. The people who worship the confederacy — this moral moron had a license plate with a confederate flag — are traitors to the country and even if closeted, are propping up racism. This comment from one of his friends is incredibly oblivious.

“I never heard him say anything, but just he had that kind of Southern pride, I guess some would say. Strong conservative beliefs,” he said. “He made a lot of racist jokes, but you don’t really take them seriously like that. You don’t really think of it like that.”

But now, “the things he said were kind of not joking,” Mullins added.

There’s nothing wrong with being proud of where you come from, and there’s much in the South that’s good. But somehow Southern pride has become a code phrase for being white, resenting the Civil War, and opposing civil rights for non-white people.

This kid didn’t think much of racist jokes, or ‘strong conservative beliefs’, or nostalgia for the Confederacy. He should have.

That’s the whole problem right there. Flying a Confederate flag from the back of your truck ought to be a mark of shame and a sign of potential problems in the same way torturing small animals as a child is.

I am in Eugene! » « Even Libertarians can smarten up