There’s a book from the 1970s that’s being called The Most Traumatizing Kids Book Ever. All of the pages are viewable online, and I read the whole thing — it’s short — and it’s just a straightforward description of sex and childbirth, with cute simple pictures.

OK, the smiling jazz-hands baby is a bit inaccurate, but that’s why it’s an un-traumatizing children’s book. 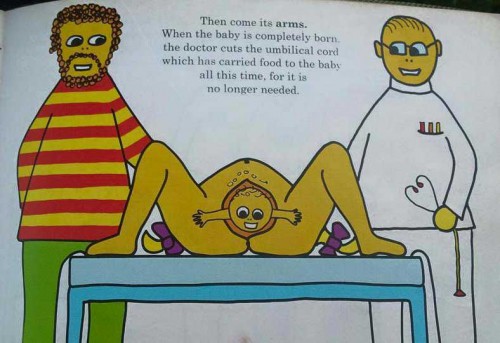 The real thing would have more screaming and blood and slime and bear more of a resemblance to the chest-burster scene in Alien. But otherwise, if I’d known about in the 80s and 90s when I had young kids, I’d have had it around the house for them to learn about sex, with no embarrassment at all.