What awful people. Boston Magazine has a run-down of their obsession with Zoe Quinn, and it’s sick and disturbing. This Eron Gjoni guy who started it all just keeps talking, and making himself look worse and worse with every word, and he won’t shut up. That’s the thing that disturbs me about these people: they aren’t smart enough to realize when their own words are more devastating to their reputation than anything anyone else can say. Or perhaps they’re so vain or so lacking in empathy that they can’t imagine anyone not siding with their perspective.

And there’s yet another example of their habit of unlimbering Schwerer Gustav and aiming it at their own foot.

Here’s a post in which a gamergater is trying to track down the names and details of Quinn’s aunts, grandmother, and other relatives. They’re crowing because Quinn’s grandmother died recently, and her obituary gave them data. They’re annoyed because some family members don’t use the conventional patrilineal practice of always adopting the man’s name — I’m sure they did it just to piss off some self-important punk. 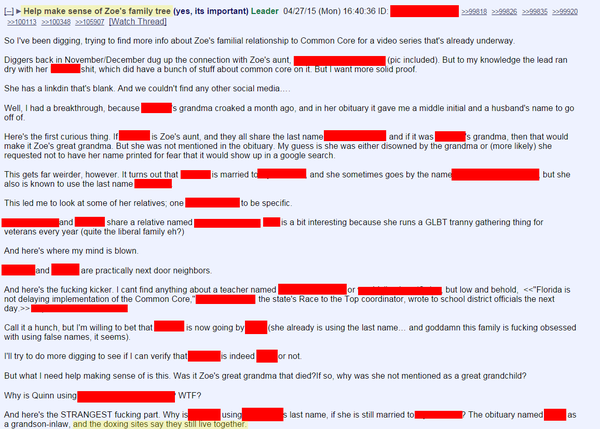 I mean, seriously, this is what it comes down to? Tracking down some distant relative and targeting them for harassment, or linking them to some bizarre conspiracy theory about Common Core, all because Eron Fucking Gjoni is an entitled jerk?

Friday Cephalopod: I just want to jump in with them! » « I’d Do Anything for Love (But I Won’t Do That)