This leafhopper is a myrmecomorph – it has sprouted lumpy dark extensions of its carapace that resemble an ant. It spends its whole life living in a costume! 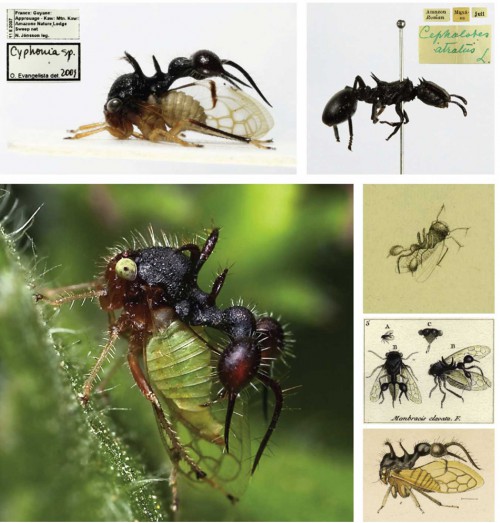 Cyphonia clavata: The treehopper Cyphonia clavata with a mimic of an ant (top right) extending from its pronotum (photos: M. Stensmyr). The ‘ant’ presumably serves to deter predators as the treehopper struts about its habitat (lower left, photo: S. Sanowar). This peculiar-looking insect has also been depicted historically several times, as exemplified here by illustrations by (from top to bottom) Caspar Stoll (1788), Jean Antoine Coquebert de Montbret (1799–1804) and William W. Fowler (1900).

What do you call an amazon? » « The flamboyantly cheesy Dr Oz