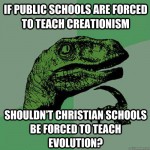 Eric Hovind gave a talk at a public high school in Georgia. He titled it “Critical Thinking”, and tried to claim that it wasn’t an out-and-out creationist talk.

I suppose I could take one of my old biology talks, slap the title “High Finance” on it, and try to bamboozle Wall Street into giving me one of those $25,000 speaking gigs, and that would be as dishonest and stupid as what Hovind did.

Hovind’s powerpoint file is available online, so you can judge for yourself. It’s the standard bunk, with a non-geologist, non-biologist, non-scientist presenting scattered facts, and then announcing his uninformed Biblical explanation for them. It’s embarrassingly bad, just like his father’s talks.

But I want to point out just one thing about that powerpoint.

It’s 116 slides long, and apparently he preceded it with several minutes of video. If it was a typical one hour presentation, he was flipping through that thing at two slides per minute. Which is nuts. That’s the Gish Gallop made manifest — it’s the opposite of critical thinking. It forces students to sit there and consume images.

Just for perspective, a typical one hour talk for me uses 20-30 powerpoint slides, and I often feel that that is excessive. My best talks have been about 15 slides long. As my grad school advisor would often tell me, if you’re going to the effort of creating that image and showing it to the audience, why are you only taking seconds to discuss it? Work the slide! And if there isn’t enough information on it for you to spend even three minutes talking about it, cut it.

But then, Hovind is just following in his daddy’s footsteps. I was at one of Kent Hovind’s talks, where he ripped through 700 slides in two painful hours. Eric is going to have to at least double his rate of babble to catch up.

So that’s why I avoid mirrors » « Should we debate loons, again?