Oh, no! I have learned that I’m on a blocklist! I guess I should moan about libel and cry. 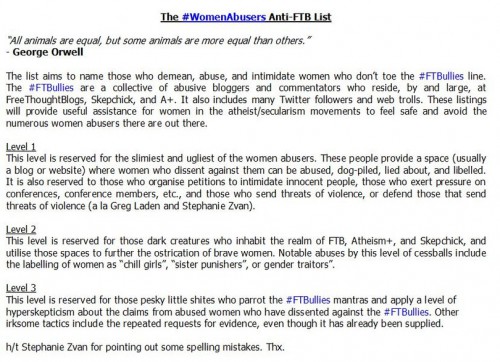 This level is reserved for the slimiest and ugliest of the women abusers. These people provide a space (usually a blog or website) where women who dissent against them can be abused, dog-piled, lied about, and libelled. It is also reserved to thos who organise petitions to intimidated innocent people yadda yadda yadda.

I guess I should waste the time of some lawyers and demand justice, as some gamergate goons and anti-feminists are doing in response to being put on a block bot, except for one thing: I’m a big boy now. You can call me “slimy” and “ugly” all you want, and I don’t think the insult requires legal redress. I also don’t think that taking your legal advice from Breitbart.com or some demented loon who calls himself the “Witchfinder General” is exactly brilliant. So no, sorry, I would never even consider siccing lawyers on randos on the internet who don’t like me and call me mean names; I do consider it rather pathetic that some people seem to think that being labeled a “troll” is grounds for stomping into a court and wailing about the cruelty and injustice of it all. It looks like at least one lawyer also agrees.

If anyone wants to use that blockbot with my name on it (if it exists; I think it’s just a front used as an excuse to throw out some insults), that’s fine with me. You get to control your experience on the internet, and if someone announces that they want to use a service that blocks ol’ Crankypants Myers, what am I going to do? Tell them no, they have to read my words? Whine that they should have been more polite about it? Jeez. Some of us are grown-ups, you know.

As for the blockbot or the ggautoblocker, I don’t use them. I think they’re a little too crude, and I’d rather make my own decisions about what to read, thank you very much, and am quite willing to block people without anyone else’s help. But at the same time, I entirely understand what’s driving the implementation of these automatated blockers.

The people complaining about them don’t seem to understand the difference between an insult and harassment. The indignant protesters are upset at being called a mean name, and the solution there is easy and obvious: don’t read it. But the people who are using those bots are doing so because they face constant harassment on Twitter — there are people who spend all their time sending floods of abuse at the targets of their hatred (like the fellow who created that list with my name on it — now that’s an asshole who really needs to get a life) and they can create so much garbage in your timeline that it makes the whole service unusable. They don’t even need to call anyone a ‘mean name’: sealioning is a popular tactic, in which you just insist in oh-so-polite terms that your target is a horrible person, and along come all their friends to whine at you.

Being insulted is trivial. Being harassed is serious. If you’re going to complain about being insulted, I expect you to at least recognize that harassment is a much bigger problem to those facing it, and propose solutions to that problem rather than just demanding an immediate shut-down of the current clumsy solutions to persistent abuse because your fee-fees have been hurt.

Party in July at our place! » « Unreasonable ideas don’t seem to be affected by reasonable argument