Men are also the victims. Read this analysis of a recent paper in human population genetics: coincident with the rise of agriculture, there was a drastic bottleneck in the effective population size of men, but not women — the interpretation is that there was a massive concentration of wealth and power in the hands of a few men, who basically used that power to put all the reproductive rights in their hands, and the hands of their sons.

There is a nice infographic to explain the concept. 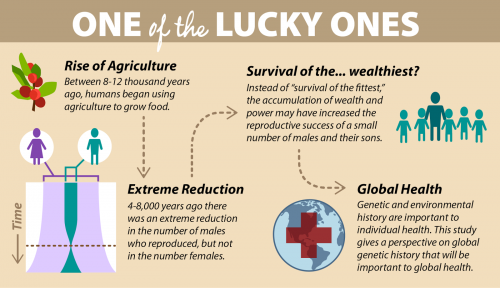 Biology says all men ought to be raging democrats, opposing the concentration of wealth into the hands of a few. Psychology, unfortunately, says that most men are stupid and imagine they are one of the few.

Do you need another reason to despise Answers in Genesis? » « Twitter might be changing some of its rules